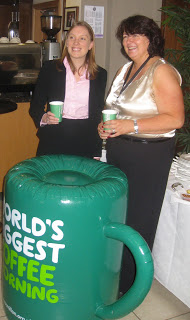 Attending the world’s largest coffee morning, in aid of Macmillan Cancer Support, seems to be an absolute must for a local MP. Reading the Macmillan twitter page, hosted by their parliamentary team, it looks like a huge number of MPs went along to support the initiative and rightly so. The World’s Biggest Coffee Morning started in 1991 and has raised over £60m for Macmillan in that time.So for this year’s event, I went for coffee at the Village Hotel in Aylesford where it was phenomenally busy. There were cake stores galore plus activity stalls, creative arts for sale and a tombola. There were loads of little children there and I couldn’t really work out why until I was told Peppa Pig was expected to attend too! In one week, I have been photographed with men dressed up as elephants, lions, a water butt and a drink of water (don’t ask) I drank my coffee, chatted to some folk and then escaped before Miss Peppa arrived!
Posted by Tracey Crouch at 10:27