What an Amazing day! 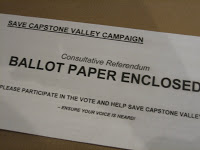 What an incredible day! Firstly we managed to get the final lot of ballot papers out in our referendum on the future of Capstone Valley. All households across Chatham should now have a ballot paper and if returned will be counted on 3rd November. I delivered a batch around White Road and was touched by a young man with several gold pieces of jewellery, a cigarette and a scary looking dog telling me I was better looking in real life than in my picture which just goes to show that chivalry is well and truly alive in Chatham!Next I met for a quick coffee with a local journalist before heading to Larkfield to examine a specific traffic problem that has been raised with me following the survey. Then after a quick stop at Toys R Us for a present for my soon-to-be 5 year old nephew, I heard on the car radio the news that after marching everyone up the election hill, Gordon Brown has delayed the General Election until at least 2009. I am not surprised but I am severely disappointed. My own surveys have shown an increase in Conservative support across Chatham & Aylesford and as I have posted on this site before many people have told me they want to get rid of this Labour Government as soon as possible. And who can blame them when violent crime is rising, the NHS is in chaos, police are fed up with working to targets and immigration is out of control. Gordon Brown has said that he wants to show people his “vision for change” – the people of Chatham & Aylesford don’t want to see a “vision”, they want to see a change in Government.
Posted by Tracey Crouch at 18:36