A weekend of Remembrance 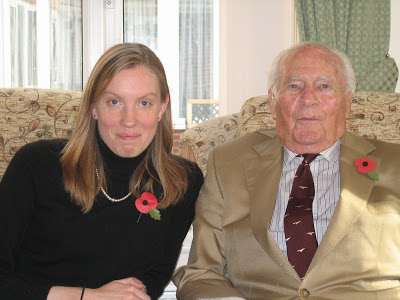 I have spent the whole of this weekend remembering our war heroes and those they have left behind. Yesterday I visited the Royal British Legion Village and met many residents who over coffee and cake were proudly telling me their war stories. I had a mini tour of one of the courts and was very impressed with the living accommodation, shown to me by Squadron Leader Des Butters (pictured) who I think was equally impressed by my ability to identify his model airplane as a Lancaster Bomber – one of the finest aircraft of all time in my opinion. I was delighted to meet two gentlemen who had served in the (former) Rhodesian Army who live in a part of the village dedicated to them, but was perplexed that to hear that they cannot march down Whitehall as an individual unit but have a separate service instead. I thought after the Gurkhas were recognised that this issue had been rectified? I shall find out. I also met a number of ladies who had served during the war as Wrens who were telling me wonderfully naughty stories about being dispatch riders etc.This morning I went to St Peter’s and St Paul’s Church in Aylesford and was treated to a congregation made up of many children in scouting uniforms. The vicar was wonderful and encouraged them to participate in the service, asking them questions etc – which had many of us giggling at their sweetly innocent answers. The sun was shining through the autumn leaves on the trees making the two minute silence both beautiful and moving. Then this afternoon I headed back to the British Legion Village for another service but this time alongside the many former service personnel dressed in uniform with the polished medals proudly adorning their breast pocket. I think one of the most touching sights this afternoon was watching the contrast of elderly gentlemen lay wreathes in memory of those colleagues who lost their lives, followed by two young army cadets marching in time, and with their whole lives before them, laying their own mark of respect. I felt honoured to be in the company of all those who served in our armed forces defending the country – may their time, and the sacrifice of those who did not return, never be forgotten.
Posted by Tracey Crouch at 17:48

I tried posting this before, but it fell foul of whatever it is that sometimes “loses” my comments from your site…Remember that our excellent Tashi (who stood in River ward and nearly got elected!) is an ex-Gurkha so will know what the situation with them is and why.