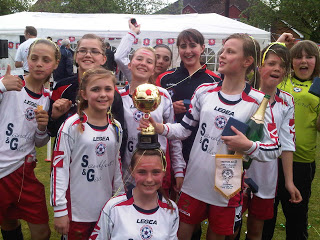 I am this afternoon one very proud football manager. At Cobdown Park, Ditton, Meridian Girls U12s won the Tina Marshall Cup Final in extra time, having been 2 nil down to Gravesham Girls after just 10 minutes. Instead of giving up, they fought hard for every ball and went into half time only 2-1 down having clawed back a goal. What followed was a very exciting second half which saw us equalise twice, forcing extra time after the game finished 3-3. There were 7 minutes each way and penalties would follow if it was still a draw. Meridian’s Under 10s earlier won their Final on penalties and I didn’t fancy trying to pick 5 girls to take spot kicks (although I had in my mind anyway). Thankfully we didn’t need to go down that route after we scored another goal in each half and the game ended 5-3 to Meridian. Gravesham played very well and have always been one of the nicest teams to play against; as a club they share our own club’s values of you play cleanly and fairly and accept the outcome graciously. All girls shook hands and it was acknowledged in the presentation to have been the best game of the day so far.After a poor first 10 minutes, Meridian Girls played well and never gave up fighting. It is for that reason that I am most proud of them, not that they won a shiny trophy. They worked hard for their medals and as they left being spoilt rotten with sweets and ice cream by overjoyed parents, I am sure they will still be smiling for some time yet.
Posted by Tracey Crouch at 16:24

Thankfully we didn't need to go down that route after we scored another goal in each half and the game ended 5-3 to Meridian.