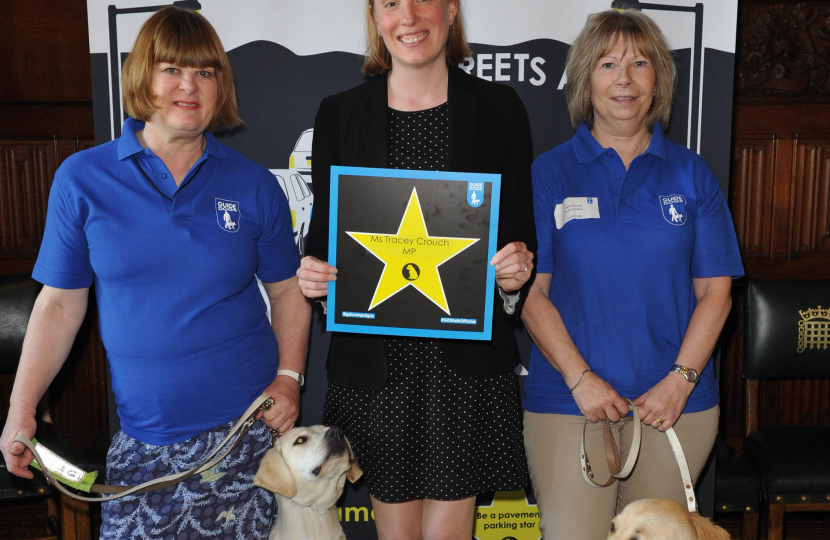 As a long standing supporter of the Guide Dogs charity and independent chair of Medway’s Physical Disability Partnership Board the issue of pavement parking is one that she takes incredibly seriously. Tracey will continue to support Guide Dogs in the local community and in their national campaigning as she believes that people should be considerate towards not only those who are visually impaired but also those in wheelchairs, the elderly, those with push chairs and children as well as the general pedestrian population and not use pavements to park their cars.

While pavement parking is an issue across the country and the constituency, it is something that has been predominantly raised with Tracey by constituents in the Medway area. Tracey has therefore been working closely with councillors to tackle this issue and protect the vulnerable from having to walk in busy roads.

As part of this work Tracey recently wrote to Medway Council to raise her concerns.  Their letter of response (which is attached below) clearly clarifies responsibility and on what occasion the local authority and the Police are able to act.  In summary the Council’s enforcement officers can issue a penalty notice to a vehicle parking on the pavement if it has restrictions such as yellow lines. The police have powers to move a vehicle if it is obstructing a highway.

However, it is not an issue that has been wholly resolved. As such, she has written to the Secretary of State for Communities and Local Government to ask for his guidance.  Within the letter Tracey said “I agree that in most cases Local Authorities are best placed to deal with the issue of pavement parking and in severe cases of a blocked highway the Police need the power to act”. However, she also believes that improvements need to be seen to ensure the safety of pedestrians. Clearly at present while councils and police have certain powers to act there is no legislation for people’s inconsiderate behaviour which forces pedestrians into the road.

Tracey will of course update concerned residents following the Ministers reply. In the meantime, if you would like Tracey to report a specific pavement parking situation then please contact her office with more details of the location so she can raise this with the local authorities or police depending on where the offence has happened.