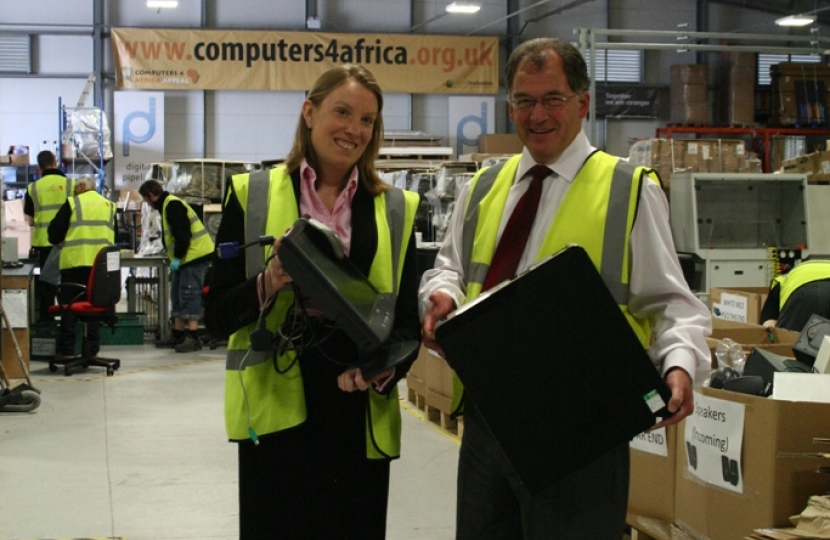 Tracey visited Aylesford based charity Computers 4 Africa. She made the visit as the charity was preparing another large shipment of computers to be sent to the African continent. To date, Computers 4 Africa has dispatched over 6000 PCs to countries as diverse as Tanzania and Somalia.

Tracey met with Chief Executive David West, with whom she discussed the charity’s plans to provide African children with a vital education in information and communications based technology. The pair also discussed proposals to help Africa’s fragile economies advance into the information age.

During a tour of the premises, Tracey met with warehouse staff who informed her of the complex day to day operations undertaken by the charity.  At the end of her visit, Tracey presented Mr West with a computer to show her support for the fantastic work being carried out by the charity, and in return she was given a football made in the traditional African way.

Speaking after the visit, Tracey said: “I am delighted to have seen firsthand the incredible work undertaken by Computers 4 Africa here in Aylesford. The work they do is entirely dependent on the generosity of people from across the UK. I would like to take this opportunity to encourage local residents to donate any unused computers to Computers 4 Africa. The work they do is truly remarkable.”

Computers 4 Africa’s Chief Executive, David West said: “In these challenging economic times it is tremendous to have the support & interest of our local MP. It is still very unusual for a child in Africa to have access to a computer in school, those that do are virtually guaranteed a job. One computer is shared by 3 children at a time – up to 8 times a day. You really can “change a child’s life when you change your computer”. The single computer donated by Tracey will last typically another 4 years and help educate over 1,000 children.”

To find out more about Computers 4 Africa and the work they do, please visit: www.computers4africa.org.uk