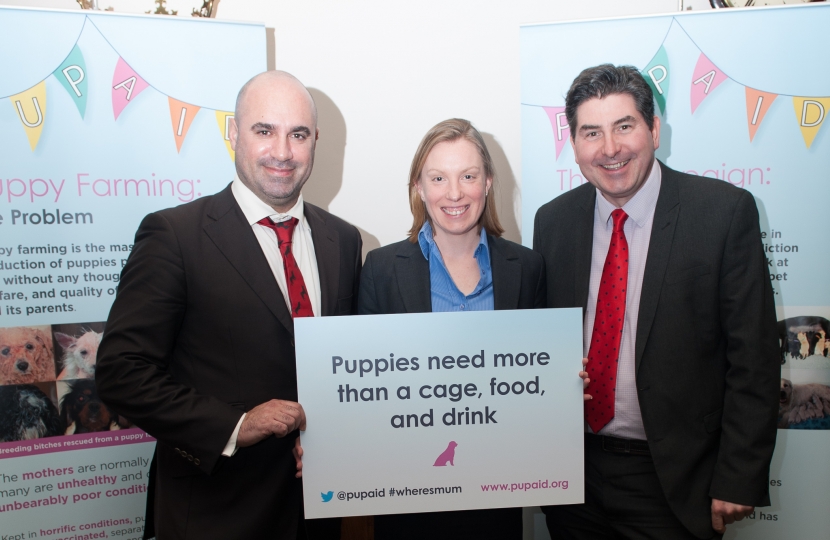 Tracey has pledged to support the campaign to stamp out the sale of irresponsibly bred puppies within Chatham and Aylesford and across the UK.

Tracey will be one of a number of MPs demanding action in a House of Commons debate in March. The debate has been secured following a campaign by the animal welfare group Pup Aid, and the support of over 108,000 members of the public who have signed an e-petition asking the government to ban the sale of puppies and kittens without their mothers present.

Puppy farms, largely found in Wales and Ireland have been using pet shops and dealers in England to sell their puppies. These dogs are bred purely for profit and without any thought for the health, welfare, and quality of life of both puppies and parents.

Kept in horrific conditions, these puppies are usually unvaccinated, unsocialised, removed from their mothers too early, then sent long distances cross country and sold en masse – usually poorly and riddled with painful disease – to pet shops, private dealers, and for sale through websites.

Commenting,Tracey said: “As well as the huge damage irresponsible puppy farming causes both pups and their mothers, new owners – often young families – are frequently left to deal with the financial and emotional wreckage when these puppies develop serious behavioural problems, or require expensive veterinary treatments, and at worst, euthanasia. As Chair of the Pet Advisory Committee, I and we are commited

TV vet Marc Abraham, who has led the Pup Aid campaign, added: “Pup Aid’s e-petition is proudly the biggest government petition supporting pet welfare of all time, clearly showing that the British public are opposed to puppy farms, and we finally have a chance to change the law cutting out this important supply route – the pet shop. The support of MPs like [name] is vital if we are to ensure that the government acts. It’s so important that potential owners see the puppy interacting with its mother and in conditions that support both its physical and behavioural development; and current legislation must reflect this.”