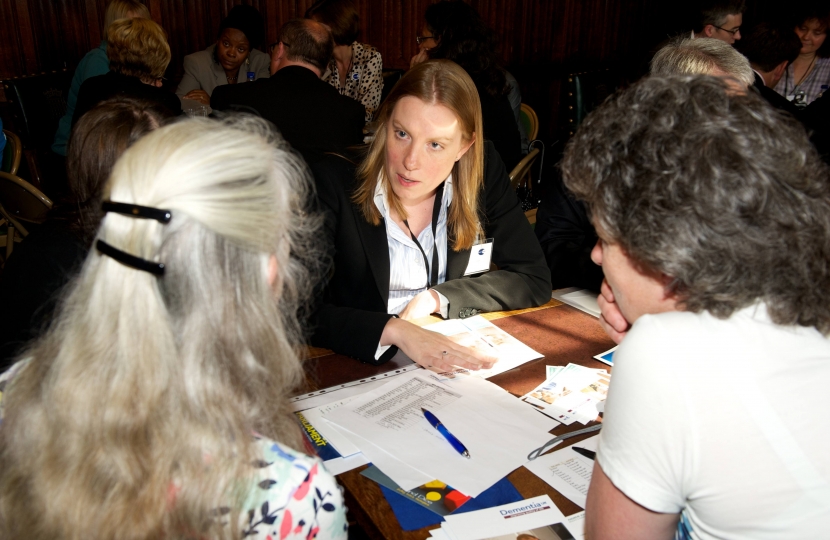 Tracey is supporting Dementia Awareness Week, to promote understanding of the condition.

Organised by the Alzheimer’s Society, this year’s Awareness Week aims to spread the message that dementia is caused by diseases of the brain and should not be dismissed as a normal part of ageing. Dementia is a term used to describe a range of symptoms, diseases which bring on dementia such as Alzheimer’s Disease can lead to memory loss, mood changes and problems with communication and reasoning.

Despite these symptoms, many people can continue to live well with dementia – driving, socialising and working – even as the condition progresses. It is important that patients with dementia are diagnosed as early as possible to help plan their care and start treatment to slow down the progression of the disease.

As Vice-Chair of the All Party Parliamentary Group on Dementia, Tracey recently attended the evidence gathering sessions for the group’s 2012 inquiry into improving diagnosis rates of the condition. The Group has heard from a range of those involved in the condition, including clinicians, social workers, those with dementia and those working to support them and aims to produce recommendations to increase the rate of diagnosis.

Tracey says: “It is vital that we spread the word that dementia is not simply a normal part of growing old, but a condition which patients can live well with if it is diagnosed early enough. In Medway, only 44% of those with dementia are diagnosed and in West Kent that figure is just 38% – it is essential that anyone who suspects they or someone they know might have the condition visits their GP to ensure that they get support and treatments as soon as possible.”

There are many groups and charities in Kent which can provide support for those with dementia and their carers. For more information, contact Tracey’s office on 020 7219 2828.

If you or someone you know show any of the following early warning signs, consider visiting your GP.