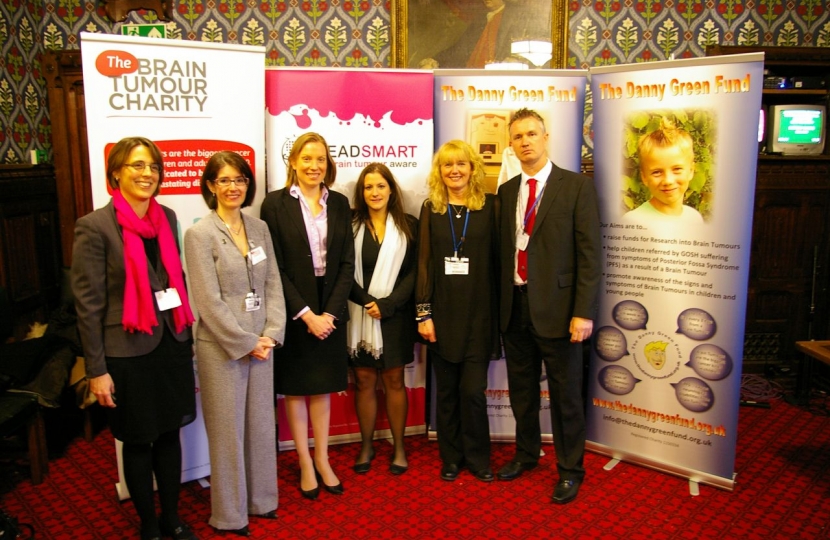 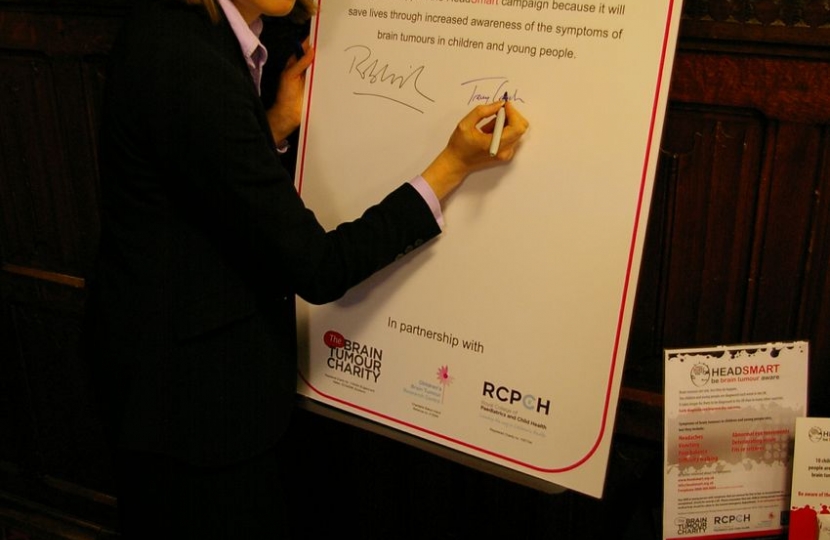 The national ‘HeadSmart Campaign’ organised by The Brain Tumour Charity, aims to raise awareness amongst parents and healthcare professionals of the symptoms of brain tumours in young people and children. This is an issue which Tracey has a personal experience with as a member of her staff was diagnosed with a brain tumour when she was a child.

Tracey, accompanied by her researcher, recently attended an event in the House of Commons, hosted by The Brain Tumour Charity and The Danny Green Fund to learn first-hand how to recognise the symptoms. They spoke with Sarah Lindsell, Chief Executive of The Brain Tumour Charity, where Khobi, Tracey’s researcher, shared the positives and negatives of her experience and explained that although now in her 20s she still has to attend regular brain scans and checkups. Sarah explained how early diagnosis is crucial in achieving positive results in a child’s recovery, and is the key to ensuring a brain tumour can be overcome and does not become a barrier to living a normal life.

Sarah showed them the resources the charity have developed, including symptoms cards and an innovative smartphone app to help people recognise the symptoms of a brain tumour. Symptoms of a brain tumour can present in children in such a way that they are frequently mistaken for less serious conditions such as viral infection, fatigue, migraine, even hay fever or depression.  These delays in diagnosis can have life altering affects to the 500 children and young people a year who are diagnosed with a brain tumour- this is nearly ten a week.

The main warning signs that parents should look out for are:

Tracey urges all parents to get hold of the symptoms cards or download the smartphone app, as well as to be watchful for the symptoms. If they persist, they need to raise their concerns with their local GP as soon as possible.

Vice Chair of The Brain Tumour Charity, Neil Dickson, said: “We are very glad that Tracey Crouch MP could join us to raise awareness of this very important issue. It took 9 months for my daughter Samantha to be diagnosed with a brain tumour. Having received many calls from parents who experienced similar delays, my wife Angela and I strongly believed that more had to be done to reduce the time taken for a diagnosis. That is why The Brain Tumour Charity started the HeadSmart campaign together with our partner organisations, who are all leaders in this field. Tragically this comes too late for Samantha, but by increasing the awareness of symptoms among parents and healthcare professionals, it doesn’t need to be too late for others.”

Professor David Walker, Professor of Paediatric Oncology at the Children’s Brain Tumour Research Centre, said: “Brain tumours are fortunately rare, but they do happen, and it can be difficult for doctors to diagnose because the symptoms can often mimic less serious illnesses. Parents have no need to worry if their child occasionally experiences headaches, for example, but if symptoms come back frequently or are present for more two weeks or more, see your family doctor. The most important thing is that parents and family doctors know the symptoms of child brain tumours and make sure that possible cases are diagnosed as quickly as possible”.