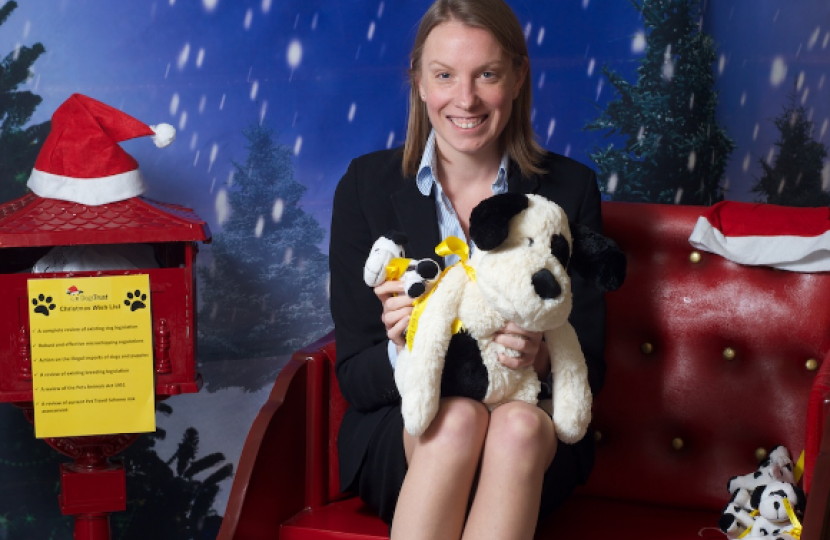 The event, hosted by Neil Parish MP, celebrated the 35th anniversary of the iconic Dogs Trust slogan; “A Dog is for Life, Not Just for Christmas”. The phrase was coined in 1978 by the charity’s CEO, Clarissa Baldwin OBE, in a bid to highlight the issue of dogs being given as Christmas gifts, and indeed all year round, and later abandoned when the novelty wears off.

MPs were given the opportunity to take a festive Dogs Trust sleigh ride and meet a large number of furry friends. These pooches, however, were all stuffed toys – the only suitable kind of dog to give as a gift! Attendees also learned more about the charity’s annual campaign, which encourages people to pause and think carefully before taking on a dog, especially during the festive season.

“I am delighted to support Dogs Trust and help the charity mark the 35th anniversary of its famous slogan, which is as important now as it ever has been. A dog is a lifetime commitment and should never be bought on impulse as if it were a new television or a pair of shoes. This message is particularly poignant during the festive season, when people are buying all sorts of gifts on a whim without necessarily considering the consequences. I would urge anyone thinking of buying a dog or puppy as a Christmas present to ‘paws’ before doing so, and remember that A Dog is for Life, Not Just for Christmas.”

“We are delighted that so many MPs are supporting us once again in raising awareness for our annual Christmas campaign. Although our iconic slogan is known all over the world, we still see dogs and puppies all too frequently purchased as inappropriate Christmas gifts. It is clear that our message is as poignant now as it was in 1978, which is why it so encouraging to see MPs get behind our message that a dog really is for life”.

Every year since 1978, Dogs Trust has campaigned to highlight the problems surrounding dogs being given as gifts at Christmas and all year round. The charity aims to curb this problem by educating people about responsible dog ownership and about the potential risks of buying pets on an impulse, be it in pet shops, directly through breeders, or online.