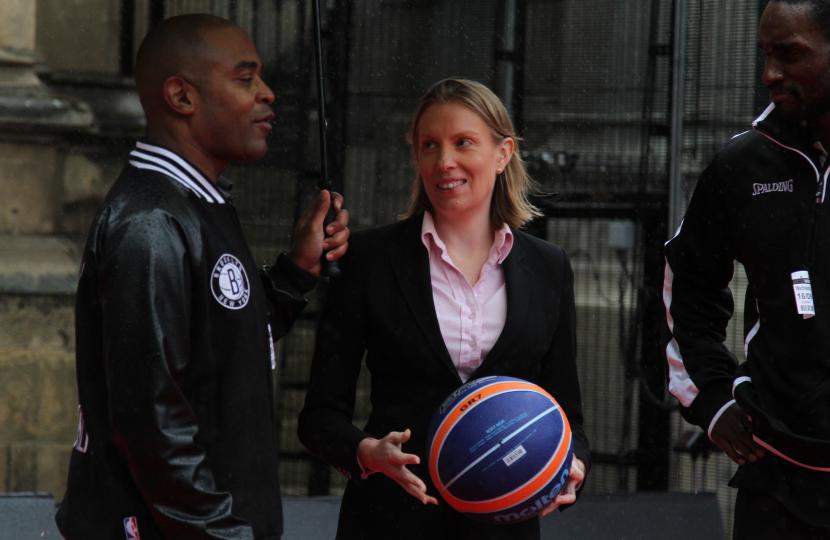 Tracey recently received a masterclass from Team GB basketball and wheelchair basketball stars this week during the return of the ‘Shoot Some Hoops’ event in Parliament to help promote the sport.

The ‘Shoot Some Hoops’ event returned after the success of last year’s event where MPs were given the chance to test their ball skills whilst also hearing about the All-Party Parliamentary Group (APPG) for Basketball’s inquiry report into the positive social impact of basketball within inner cities and deprived communities.

The return of the ‘Shoot Some Hoops’ event gave MPs the chance to prove their skills with Clare Griffiths, Helen Freeman & Mark Fosbrook from Great Britain’s Wheelchair Basketball Team, Tayo Ogedengbe and Will Neighbor from Surrey Scorchers, Barry Lamble and Erin McGarrachan from Leicester Riders and Stef Collins from Team GB and Cardiff Met Archers.

The event this year coincided with Tracey’s  Ministerial sports strategy consultation which will run until Friday 2nd October 2015 after an overall decline in weekly sport participation was seen in the Active People Survey, despite the positive news that basketball was the fastest-growing sport in the period reported.

Great Britain legend Stef Collins, who has won an incredible 125 caps for her country and also represents Cardiff Met Archers in the WBBL (Women’s British Basketball League), underlined the importance of the event.

Stef Collins said: “To inspire the next generation of players and to ensure the future of basketball is strong requires a collective effort. Basketball is one of the most widely played sports in our country and so many young people out there have huge potential which we don’t want to see go to waste.

“I hope that decision makers will recognise that they need to be given an opportunity to shine – not least the thousands of people who play in our inner-cities and urban areas. That is why I am stepping out with the politicians from the All-Party Parliamentary Group for Basketball. Their backing for the sport is vital and appreciated by us all.

“Myself and the players try to do the best we can on the basketball court, but as athletes and also for those players who want to follow in our footsteps, support is needed off the court too.”

Speaking after the event, Tracey Crouch MP said:“It was great to attend the second APPG Basketball’s ‘Shoot Some Hoops’ event in Parliament and hear about the need to support basketball from the grassroots up, as well as shoot some hoops with some basketball players”

“There is a lot of untapped potential in the UK for basketball to flourish and I hope with the Government’s current consultation into a new sport’s strategy that basketball will get a much needed hearing into how best we support grassroots team sports and see young people getting more active here in Chatham & Aylesford and across the country.”