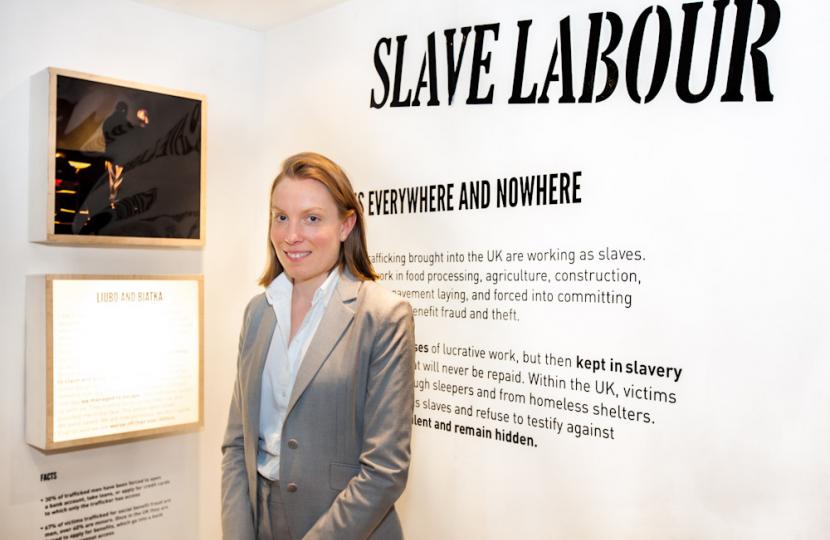 Tracey recently attended an exhibition in the House of Commons highlighting the hidden nature of Modern Day Slavery.

The exhibition built by students from the Central St Martin’s College of Art depicts the four different kinds of slavery hidden away in our society.  Curtains, doors, drawers and tea chests concealed the stories and photographs of survivors.

The survivors who shared their stories with the Human Trafficking Foundation to create the exhibition attended the opening.  Among them was Cristina, a Romanian girl sold by her mother into prostitution in Birmingham when she was 16 and who narrowly escaped being snatched from her local authority care home by her traffickers.  There was also a man, duped by a job advertised in Hungary, and on arrival here forced to work without pay, compelled to open a credit card account operated by his slave master, forced to claim benefits for non-existent children.

No one knows the real numbers involved.  Yet, the Serious Organized Crime Agency knows that at least 2,000 victims are found each year.  However, they believe that is the tip of the iceberg and that for every victim found, another ten remain hidden.  The Human Trafficking Foundation concludes there must be up to 20,000 slaves in the cities, towns and villages of the UK.

Of these victims that have come to light, 49.5% are known to have come from the South East.

Tracey said “I was appalled to learn that even my constituency is affected by modern day slavery and that there will undoubtedly be deeply traumatised people who have been trafficked to the UK and abused living in my area.”

“As a result of what I’ve seen today, I want to ensure that everyone in my constituency is more alert to the signs of modern day slavery.  I hope students in schools, public service workers, the police, as well as those in private business will join me in this task.  In parliament, I want to see the government put modern day slavery at the top of the political agenda.”

Anthony Steen, Chairman of the Human Trafficking Foundation said: “What is amazing is that trafficked children, unlike adults, are offered no special are in spite of what they have been through.  They have no safe haven since in local authority care hundreds of trafficked children go missing each year.

Speaking at the opening of the exhibition, the Prime Minister said:

“Modern day slavery comes in many forms, in many ways, and we have to have a really concerted approach to crush it, to stamp it out and to make sure that we look at the rights of those who are affected and take a criminal approach to those who are the traffickers and above all call it what it is: slavery.

“Congratulations to all of you for putting on this exhibition here in the mother of parliaments; it’s the right place for it to be.  I very much look forward to seeing the exhibition, to meeting those who have been caught up in this appalling trade and to leading a government that will help stamp it out.”