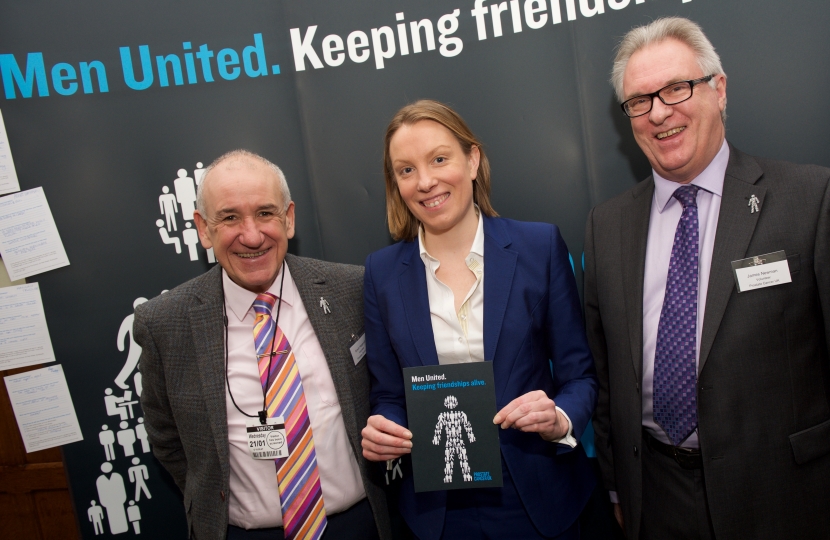 Tracey has pledged her support to Prostate Cancer UK’s Men United campaign at a reception at the House of Commons, hosted by Luciana Berger MP – the Shadow Minister for Public Health.

The new campaign, which started on Thursday 29 January with a nationwide television campaign, aims to ‘keep friendships alive’ by encouraging men to see their mates more and do something great together to help beat prostate cancer. The campaign launch coincides with a recent YouGov survey1 of over 2,000 men, conducted on behalf of Prostate Cancer UK, which revealed that 84 per cent of men believe that spending time with their mates is good for their health and well-being.

Owen Sharp, Chief Executive of Prostate Cancer UK, whose reception speech revealed the organisation’s ambitious vision to get men across the UK the early detection, effective diagnosis and better treatments they need to beat this disease, said today:

“Over the past year, our movement for men – Men United – has caught the imagination, and a new zeal for change in men’s health – with more than 200,000 people signing up to pledge support. Men from all walks of life, from footballers to lawyers and politicians to plumbers, have formed a growing army, raising funds to find the answers for the future through research and supporting men now.

“Now entering its second year, we’re delighted to have the support of Tracey Crouch MP to help us on our journey to ensure every man facing prostate cancer gets early detection, effective diagnosis and better treatments.

“By joining Men United people will get to see their mates more, do something great together and help us beat prostate cancer. Whether it’s big or small, signing a petition or running a marathon, doing it together is what really matters. We know what starts with a quick ‘hello’, a chat in the pub or a barbecue with mates, can end with a nationwide army of men – ready to fight for their friends, themselves and men everywhere.”

Tracey said; “I am honoured to be supporting Prostate Cancer UK’s latest drive to encourage more men to join Men United in the name of men’s health and to ‘keep friendships alive’. Seeing our friends is good for our health and well being and with 1 in 8 men in the UK facing a prostate cancer diagnosis, men never know when they might need a friend to lean on, or be there for a friend who’s received the bad news. Investing in our friendships and being there for our mates is so important and I am wholeheartedly behind this campaign.”

For ideas of how you can spend time with your mates and ‘Keep Friendships Alive’, people are being urged to search Men United, and sign up.