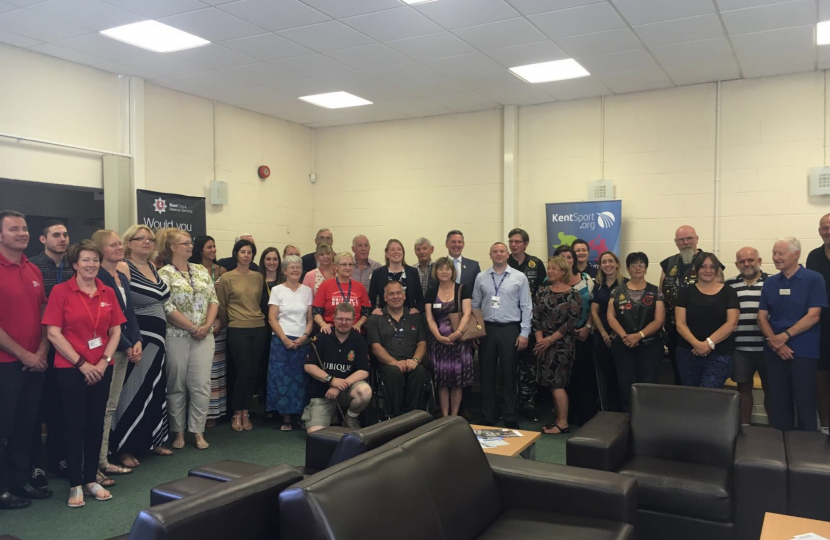 The event brought together nearly 20 support organisations such as Citizens Advice Bureau, Age UK, Euro Mobility, who will be on hand to give advice where required.  There was an opportunity for attendees to take part in special activities, try out a few sports and join in in a drama performance led by Maidstone’s Hazlitt theatre.

Tracey said: “This is an important service to the community in reducing social isolation and encouraging well-being.   I am very happy to see this delivered to our older Veterans via RBLI, a significant charity that has been delivering quality services to ex-service personnel for nearly 100 years.”

The event is a collaborative effort administered by The Royal British Legion (TRBL) and delivered by Royal British Legion Industries (RBLI) in conjunction with Well-Being People. The next events scheduled are: 24th August- The Gallagher Stadium (Maidstone FC); 15th September – Cyclopark, Gravesend;  and on 26th October – Chamberlain Manor Ashford.

Although a new project, the model builds on services already provided by RBLI and proven to be effective.    “It reflects the needs of both the veteran population and local communities”, said   Mike Bishop, Aged Veterans Healthy Living Co-ordinator,  who emphasised the importance of this collaborative effort to reducing vulnerability, improve health, wellbeing, quality of life and ability to live independently .  It also meets the local authority’s requirements for fulfilling their commitment to their communities, particularly linked to Military Covenant pledges.