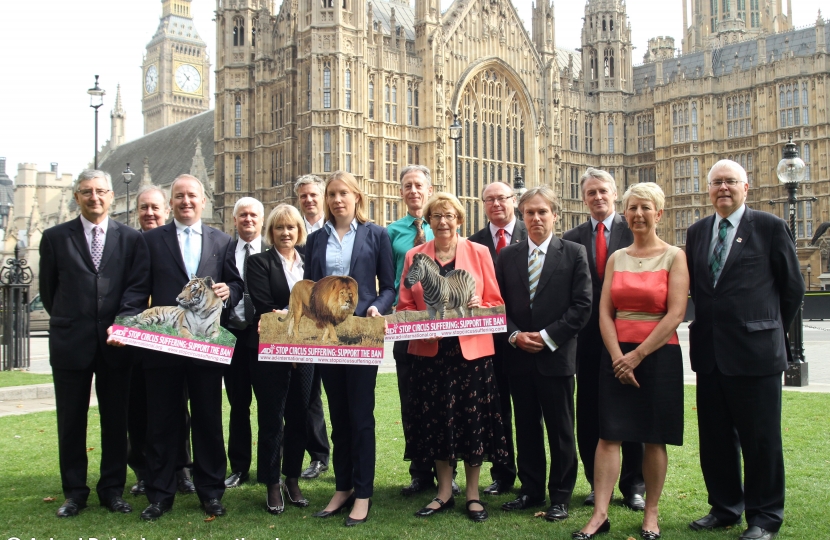 Tracey has today joined Animal Defenders International (ADI), the organisation spearheading the campaign to end the use of wild animals in circuses in Britain, to back a new bill introduced today by former Labour Defra Minister Jim Fitzpatrick MP to ban such acts.

Parliament voted unanimously in favour of a ban in 2011, and the Government first announced that it would take action on this issue in March 2012. A delay in bringing in a ban has seen the number of wild animal acts increase and the return of big cats to Britain. This bill, which is identical to the one published by the Government last year and scrutinised by MPs, would ban wild animal acts by the end of 2015.

Tracey said, “Wild animals are complex creatures with a range of needs which a travelling circus simply cannot meet, even with the best will in the world. That’s why the animals need this Bill to become law quickly, which I hope it will.”

ADI President Jan Creamer said: “ADI is delighted to have the support of Tracey Crouch MP on this important issue. A ban on the use of wild animals in circuses enjoys overwhelming political, and public, backing so we hope the Prime Minister and government will get behind this new bill to finally bring an end, as promised, to the suffering of lions, tigers and other wild animals in British circuses.”

Veteran actor Brian Blessed, said “It’s about time the government stopped making promises and started taking action for our animals. Let’s do the right thing and ban this practice now.”

Social justice campaigner Peter Tatchell who also attended and supports the bill said “it is wrong for circuses to subject wild animals to such physical and mental suffering.”

ADI’s shocking revelations of the brutal violence and constant chaining of Anne the elephant at the Bobby Roberts Super Circus sparked a public outcry across the nation in 2011, and led to a unanimous vote in favour of a ban from MPs following a Commons debate the same year. Anne’s owner was subsequently found guilty of offences under the Animal Welfare Act. Public support for a ban on the use of wild animals in circuses has been consistently high for 15 years, with a Defra public consultation showing a resounding 94% of respondents supporting a ban on such acts.

This year ADI exposed how animals touring with Peter Jolly’s Circus, one of two circuses still using wild animals, are not coping with their unnatural lives. A lion and tiger were filmed pacing up and down their ‘beastwagon’, exhibiting repetitive, abnormal behaviour not seen in the wild. The big cat act is presented by Thomas Chipperfield, a relative of the notorious Mary Chipperfield, who was prosecuted for animal cruelty following an ADI exposé in the late 1990s.

The Government says that it remains committed to the wild animal circus ban. The Prime Minister promised an ADI deputation in April that “We’re going to do it” and in response to the joint letter from 75 ADI celebrity supporters and MPs, David Cameron reiterated his commitment to ban what he calls an “outdated practice” in a personal letter to ADI.  But ADI fears time is running out.

ADI and other animal organisations have urged the Prime Minister to support the new bill and ensure it is given time to pass. ADI is also urging members of the public to ask their MP to support the bill.