Tracey helps Cats Protection “Speak up for Cats” this Christmas 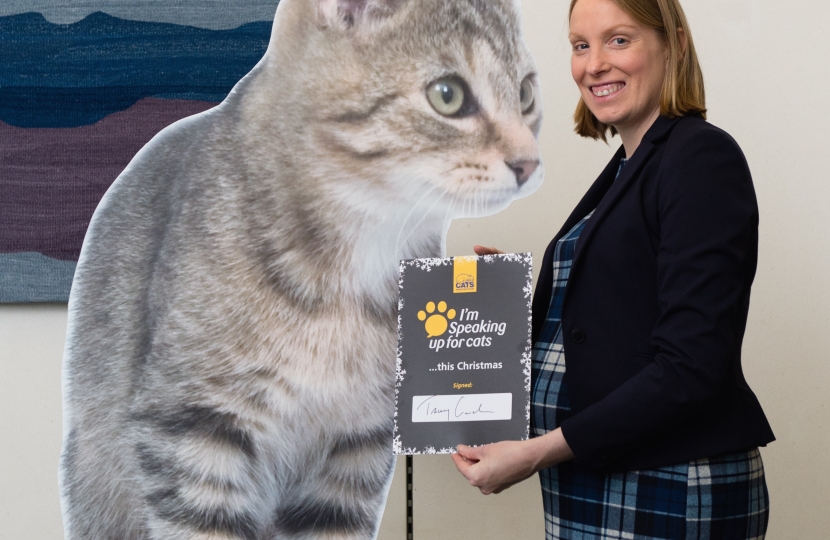 Tracey joined the UK’s largest cat charity at a Christmas reception to highlight how politicians can improve the lives of one of the nation’s favourite pets.

More than 30 other MPs, along with Lord Guy Black of Brentwood, also attended the informal event, hosted by Mark Spencer MP on behalf of Cats Protection, at Portcullis House on Tuesday 8 December.

Tracey has been a longstanding support of the charity, which helps over 205,000 cats every year through its network of over 250 volunteer-run branches and 32 centres.

Cats Protection’s Advocacy Manager Jacqui Cuff said: “It was great to see some familiar faces as well as some new MPs who were elected at the General Election in May. Cats are hugely popular pets, with 25 percent of the population owning one, so we were pleased to meet so many politicians who were keen to find out more about our work and what they can do to help.”

As well as rehoming cats, Cats Protection is the leading authority on cats and helps people better understand their needs. The charity also promotes and supports neutering as the only effective way to reduce the number of unwanted and abandoned cats.

Earlier this year, the charity launched its Manifesto for Cats to outline a string of measures which would improve the lives of the UK’s estimated 11.1 million cats, including controlling the breeding and sale of cats, banning snares, and ensuring more owned cats are microchipped.

Tracey, proud mum to two black cats Mungo & Basil said “It was great to meet with the Cats Protection and find out about their latest work and their Christmas campaign. I am extremely supportive of their work on encouraging rehoming, I rehomed my two after they spent several years in a rehoming centre waiting for someone to give them a home. As their second christmas with us approaches I would not be without them. I encourage any one thinking of getting a cat to consider rehoming.”

Mark Spencer MP, who also owns a black cat called Parsnip and a black Labrador called Tessa, said “I am always pleased to support Cats Protection which does so much to improve feline welfare in the UK. The fact that over 9,000 Cats Protection volunteers across the UK help take care of and rehome cats is really impressive. Cats are important to millions of people and are so often a part of the family providing a whole range of benefits including love and companionship. I was delighted to meet with so many fellow MPs who also recognise the hugely beneficial role cats play in the lives of their owners. Despite being an essential part of the lives of so many people, cats are frequently subjected to mistreatment and neglect. I hope many more politicians will join with me in 2016 to bring about changes that will improve feline welfare in the UK.”

Cats Protection also gave MPs the chance to have their photo taken with its giant kitten cutout, and shared its own take on a seasonal classic with its “12 Nays of Christmas” compilation of tips for keeping cats safe during the festivities. They are:

Twelve gifts a-giving Make sure that any toys you buy your cat for Christmas are feline-friendly. Choose ones with embroidered features as opposed to plastic and glass ones which can come off. If you get your cat edible gifts, only buy special pet treats.

Eleven things a-choking Avoid using tinsel and ‘angel hair’ as these can get stuck in cats’ throats. If your tree is real, vacuum around it frequently – as well as being a choking hazard, pine needles can hurt cats’ feet and cause infections.

Ten cords a-shocking Electrical cords for fairy lights could be mistaken for toys or prey, so keep them covered up to avoid disaster.

Nine candles burning Keep candles out of your cat’s reach to avoid them being knocked over or causing him an injury.

Eight gifts a-miaowing Never give cats as presents unless this has already been agreed with the recipient. It goes without saying that cats are a commitment beyond the festive season and are not to be treated as novelty gifts.

Several toxic plants A number of festive plants are potentially fatal to cats, including mistletoe, holly, ivy and Christmas roses so choose carefully and keep them out of the reach of moggies. For more information on which plants may be harmful to your cat visit the International Cat Care website at www.icatcare.org

Six baubles swinging Cats may well be tempted to tap dangling decorations, so it’s best to avoid glass baubles as they could shatter.

Five dressed-up cats Do not be tempted to dress your cat up. You may think it makes him look ‘cute’, but he’ll only feel stressed.

Four calling guests Having friends and relatives to visit is part and parcel of the Christmas period, but your cat may not wish to join in with the festivities. Ensure that he has a quiet room to himself with his food, water and litter tray easily accessible.

Tree water hazards If you have a real tree, the base should be a no-go area for puss. The water may contain preservatives applied to the tree that are poisonous to cats. Cover up the base so he can’t get at it.

Two turkey bones Restrict food treats to a small amount of boneless turkey for his Christmas dinner. Some rich foods – like chocolate – are toxic to cats and should definitely be off the menu.

A kitten stuck up a tree To kittens in particular, the Christmas tree is a toy-toting gift in itself. Discourage your feline friend from climbing it, but also ensure that its base is as sturdy as possible in case.