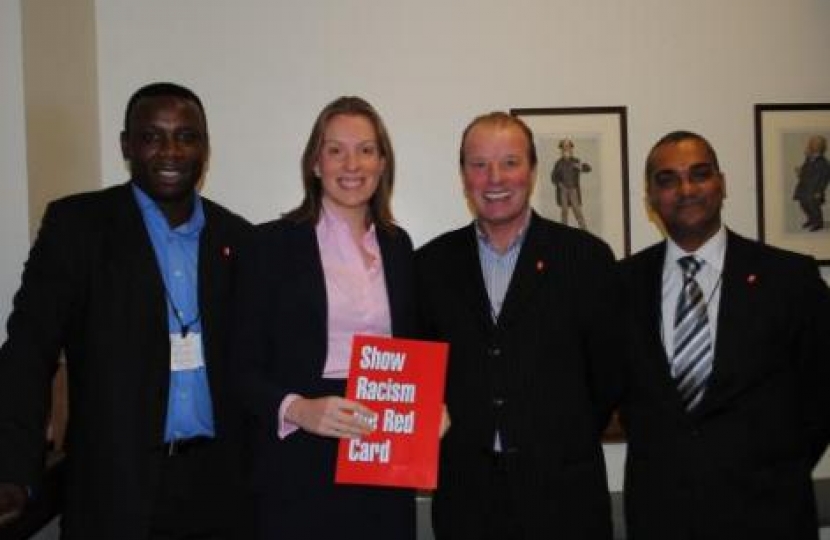 On Tuesday 19th October, I joined ex-professional footballers, representatives from the Professional Footballers Association and members of the Show Racism the Red Card campaign to give my support to the charity’s bid to become The Football Association’s Charity of the Year for 2011.

Show Racism the Red Card is an anti-racist charity, established in January 1996 with the aim of harnessing the potential of professional footballers as anti-racist role models and combatting racism through anti-racist education. The campaign involves hundreds of top footballers and managers and carries it’s work out throughout the UK delivering anti-racism workshops, football fun fitness sessions and hosting educational events at football clubs.

I joined with supporters such as the Professional Footballers’ Association Chief Executive, Gordon Taylor, Gary Lineker and ex-England Manager, Graham Taylor to support the charity’s bid to be the FA’s Charity of the year. Later this year the FA will decide which charity will become their official charity partner for 2011.  All charities go through a stringent process to become official FA partners and as well as a five figure financial donation from The FA’s Community Shield Fund, all charities will benefit from a direct association with the FA.

I threw my support behind Show Racism the Red Card’s bid to become FA Charity of the Year. I can think of no other charity that has worked so hard and so effectively to condemn racism, both within football and our society as a whole. I wish them all the best of luck with their bid!.

This sign-up event follows on from the Early Day Motion raised in parliament by Dave Anderson MP in August which received significant support. Show Racism the Red Card Chief Executive, Ged Grebby thanked MP’s for their support and said: “2011 will be the 15th anniversary year for our organisation and to get FA Charity of the Year would be a real boost for our campaign’s work.  We have been overwhelmed with messages of support from within football but also from across a whole range of organisations and individuals within the UK.”

For more information about the work of Show Racism the Red Card please contact [email protected] or visit our website www.theredcard.org.