Tracey Calls for Improvements in Survival for Ovarian Cancer Patients 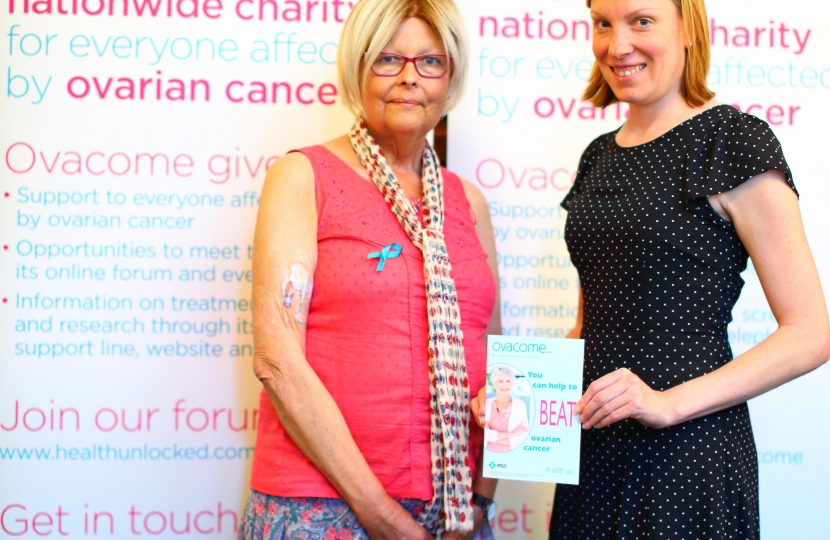 Tracey hasjoined forces with women affected by ovarian cancer to call for local action to address the steps needed to improve survival in ovarian cancer in Chatham and Aylesford.  Survival rates for ovarian cancer in the UK are among the lowest in Europe. Just four in ten women are expected to survive their disease for at least five years in England – amongst the lowest of all common cancers.

A new report, Making a difference for ovarian cancer patients, launched on Wednesday 16 July by the ovarian cancer charity, Ovacome, highlights the steps needed to improve survival in ovarian cancer.  Based on a survey of its members, the report includes a series of recommendations in three key areas – symptom awareness and early diagnosis, access to patient-centred treatment, survivorship and research.

Ovacome asked women affected by ovarian cancer for their views and respondents identified what they believe would make the biggest difference to improving survival and standards of care for other patients in the future.  The key findings included:

Ovacome, a national charity that represents the interests of women affected by ovarian cancer and their families, has also produced factsheets on the quality of services in local areas across England to help support improvements where they are needed the most.

Speaking at the Westminster launch event, Tracey said: “Ovarian cancer is the fourth biggest cancer killer amongst women.  This report highlights the need to improve survival in ovarian cancer throughout the country.  I fully support Ovacome’s efforts to tackle this important issue.”

Louise Bayne, Ovacome’s Chief Executive, added: “Every day approximately 12 women will lose their lives to ovarian cancer in the UK.  This new report, based on the views of patients, sets out what steps need to be taken to help bring this number down.   We are calling for the Government and NHS to take decisive action to improve the outlook for those affected by ovarian cancer.”