Time for the summer festivals

Hurrah, the summer is here and the festivals, fetes and open days have begun. There are so many that it is almost impossible to go to them all but today I managed two! 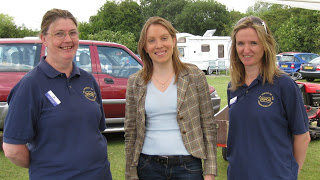 Having met the Chatham councillors this morning for a catch up, I headed over to the RSPCA’s Open Day in Leybourne. There were so many dogs I was sure it would be bedlam but it was a surprisingly calm environment! The dogs of all shape, size, and hair length were merrily sniffing each other or things that might be food leaving their owners to look at the range of stalls selling pet-related wares. Rather brilliantly, there was even a “cooling area” for the dogs which was great fun to watch because the dogs would come along, plonk themselves in the big tin baths and then get out and shake themselves down soaking an unsuspecting passer-by. It was really good fun to watch!!
After leaving the Open Day and popping by to help clear up a bit from last night’s dinner, I headed up to the Blue Bell Hill village fete. The dancers this year from the local school were fabulous and clearly Strictly Come Dancing has influenced some more lads to get involved as there were two in their bow ties leading out the troop for some ballroom dancing. Like last year, I picked up my bottle of Kent Apple Juice and grabbed an ice cream before meeting a new member for a chat in the tea tent after she heard David Cameron’s call for more people to consider standing for Parliament. It is good to know that despite all of the scandal over MPs’ expenses people still want to get involved in politics and make a difference in the community.
Posted by Tracey Crouch at 18:21

A few years ago, I stood in for the Myor and opened a PDSA Open Day in Gillingham. It was great!I also judged one heat of the dog contest…