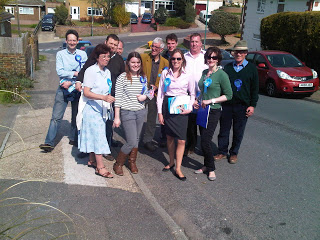 What a beautiful day to be out canvassing. This morning I was with a team in Lordswood and then this afternoon I was with a team in Princes Park, and a third team were out in Larkfield. The sun was shining, it was nice and warm and people were out in their gardens, doing DIY or washing their cars. They were happy to talk and we were happy to listen. So many people are fed up with this Government – they feel very let down. I spent a long time talking to a couple today who had voted Labour but were not going to vote for anyone despite the fact that they desperately wanted change. I managed to get their support in the end but it reinforced how angry people are about the state of the country; whether it is the economy, uncontrolled immigration, a broken benefits system, youth unemployment or the lack of support for the older generation, local residents I talk to are fed up that they are not listened to and nothing is done to help them.
We had a good day today. The response was positive, the mood amongst the troops is good, and the pub we had lunch in was excellent (despite the fact that Spurs were losing on the big screen). I have a day off from canvassing tomorrow but back on the stump Monday. 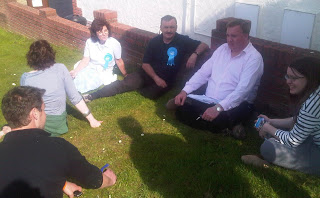 (Lazing on a sunny afternoon…)
Posted by Tracey Crouch at 20:15