A new generation of Sure Start centres 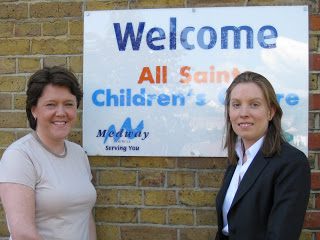 I recently visited All Saint’s Sure Start Centre in Chatham with Conservative Family Spokesman Maria Miller MP. I was hugely impressed with the Centre and so was pleased today that Conservative Leader David Cameron announced plans for a new generation of Sure Start Centres to focus on the neediest families and involve organisations with a track record of helping parents.
They will be similar to Academy schools in that they will be independent institutions which operate outside local government control and are funded directly by central government.Speaking today in London, David said he was committed to keeping Sure Start, but he will also seek to improve it by taking it back to its original purpose – namely “early intervention, increasing its focus on those who need its help most and better involving organisations with a proven track record in parenting interventions”.
Posted by Tracey Crouch at 19:43