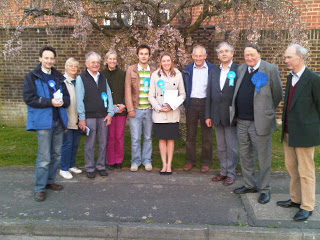 As you can see what had a good team out in Snodland last night (and this picture doesn’t include Cllrs Les Withey and Chris Block who missed the photo and of course the photographer!) plus we had four out in Larkfield in the afternoon and six out in Ditton in the morning. Of all the doors I knocked on or people I spoke to, I met one person who had always voted Lib Dem and one person who was “considering” voting Lib Dem. I am not sure I have yet seen any evidence on our local doorsteps and streets of the “Lib Dem surge” the media keep talking about – it will be interesting to look at the raw data behind the polls, but I don’t really have the time or the energy after 3 canvass sessions!
Posted by Tracey Crouch at 07:15