KCC AGM and canvassing in the rain!

On Friday I attended the Kent County Council Conservative Group AGM followed by the annual lunch with Guest Speaker Michael Howard. It was fascinating to hear what KCC has in story for the next few years although I was horrified to learn that Kent has the highest percentage of drugs misuse in the country.
After I left Maidstone I went to see a gentleman in Chatham about the standard of dementia services in Medway. Home visits are one of the most fulfilling parts of the job of being a candidate – it gives you a real opportunity to sit down in a relaxed atmosphere and talk through the issues at length. Carers are too often forgotten but they fulfill a vital role in our society and they need our support more than we can ever fully understand. I will definitely be picking up with the local health providers standards of dementia services when I next meet them. 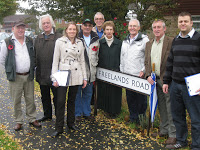 Then on Saturday, we had a large team out in Snodland for a canvass session despite the persistent rain. There were some interesting issues raised on the doorstep this week including Nick Griffin’s controversial appearance on BBC Question Time – the whole episode has clearly divided opinion although I think whilst the BNP are a legitimate party whether we like it or not, the BBC were not wrong to give him a slot on the programme. Unless their share of the vote decreases or they are banned by the Government then they will no doubt get other opportunities in the future.
After ham, egg and chips at the Robin Hood, I headed off to Homebase – this is clearly now what my free time will consist off…
Posted by Tracey Crouch at 20:22