I want a referendum rally 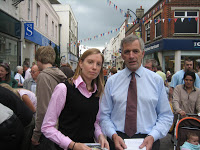 This afternoon I joined Kent MEPs Richard Ashworth (pictured) and Dan Hannan for a rally in Maidstone High Street calling on shoppers to sign a petition demanding a referendum on the EU Treaty.The cross party campaign group “I want a Referendum” explains the case for a referendum quite clearly:“The original EU Constitution was drawn up in 2003. It proposed a significant shift of power from Britain to Brussels. As a result in 2004 the Government decided it was so important that voters should be given a say on it in a national referendum. In 2005 French and Dutch voters overwhelmingly rejected the Constitution in their ownreferendums. But despite this EU leaders have decided to bring it back again, in the formof a new treaty.Now Gordon Brown argues that a referendum is now unnecessary because, he claims, therevised treaty is substantially different to the original Constitution. But other EU leadersare more honest:• The author of the Constitution, Valery Giscard d’Estaing, says: “All the earlier proposalswill be in the new text, but will be hidden and disguised in some way.”• The Spanish Prime Minister Jose Zapatero admits: “We have not let a single substantialpoint of the Constitutional Treaty go… It is, without a doubt, much more than a treaty.This is a project of foundational character, a treaty for a new Europe.”• The German Chancellor Angela Merkel says simply: “The substance of the Constitutionis preserved. That is a fact.”Only 10 out of 250 proposals in the “new” treaty are different from the proposals inthe original EU Constitution. In other words, 96% of the text is the same as the rejectedConstitution. “So it is clear that what we have now is practically what we had before. Back then a referendum would have been allowed – now it is not. Well I want a referendum so I have signed the petition for one – you can join me HERE.
Posted by Tracey Crouch at 19:36

Good article!I have posted my own, as a result of the rally at the Sir Joseph Williamson Math School in Rochester, here which should also be of interest in respect of this whole issue.