I ache…but then we have knocked on 1500 doors today

There are no two ways about it. My feet hurt. But after another 3 canvass sessions today it is hardly a surprise! 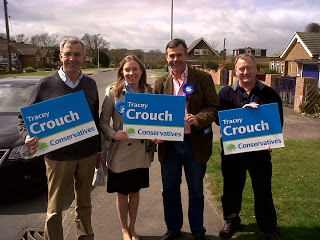 This morning’s canvass session began in the Blue Bell Hill and Walderslade ward, and I was pleased to be joined by Richard Ashworth MEP and former Conservative Party Director of Communications Charles Lewington on the doorstep. We had a team of 7 out on the doorsteps and I think we were initially surprised how few people talked about last night’s debate. The only person who raised it with me said he thought he was going to vote for Nick Clegg until he mentioned scrapping the nuclear deterrent! After a couple of hours we headed off to the Robin Hood pub for lunch (ham, egg and chips for the second day running) where I met again the Friday regulars – they are mainly ex-engineers so we had a very interesting chat about the factors behind the grounding of the planes due to volcanic ash. 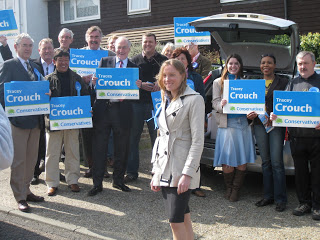 After lunch we headed off to Prince Park to greet Michael and Sandra Howard who had travelled up from Folkestone to help canvass. Michael introduced me to politics and so I have worn several rosettes and delivered thousands of leaflets over the years with VOTE MICHAEL HOWARD on them, so it was a pleasant role reversal to have Michael and Sandra canvassing for me. We had a team of 17 in total out in Princes Park so the team split into two. I had a journalist and photographer following me for the first part of the canvass which was interesting – it certainly didn’t stop people from saying what they thought! After they left I caught up with the rest of the team and another photographer from a different local paper. They had pretty much canvassed the estate so I was talking to some lads who were playing football but stopped to ask what we were doing. One was wearing an Arsenal top and after I asked him what the score was on Wednesday he challenged me to prove that I could play football. Bearing in mind I was in ballet pumps and a pencil skirt I was rather pleased that I managed to do around 15 keepie uppies before volleying it left footed back on to the grass. The photographer was so shocked that he watched in awe and didn’t take a single photo of my glorious moment!! However before we finished I did perform my little trick again, this time before a crowd of canvassers, before promising the lads I would Save Capstone Valley and heading off for tea.
After a short break of tea, cake and an interview, we returned to the streets for our final canvass session of the day. The Howards were still with us and so we had a team of 10 out pounding the streets of Walderslade. In total today we knocked on nearly 1500 doors and the big issues were uncontrolled immigration, abuse of the benefits system, the price of petrol, and job security but hardly anyone mentioned the television debates!
So now I shall rest my weary feet and prepare to return to the streets tomorrow…
Posted by Tracey Crouch at 21:12