Someone twittered yesterday why do candidates and activists always say they had a “good response”. They went onto say “it can’t always be true”. 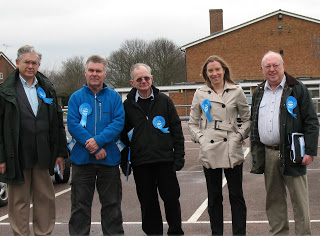 (Me with some of the Ditton team)
Well yesterday, despite the odd shower of rain, we had 3 teams out covering Ditton, Princes Park and Lordswood. I was with the Ditton team in the morning and Princes Park in the afternoon. Between us we knocked on over 1000 properties in so called “traditional” Labour areas and yet we found only 24 Labour supporters compared to 150 brand new Conservative supporters and 120 further probable supporters. I think it would be fair to say that we had a “good response” and I myself was very pleased with the day’s work. 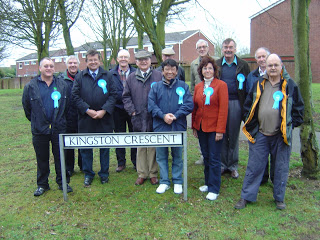 (The morning Lordswood team…raring to go!)
Hats off to the activist, who will remain anonymous, for the funny canvass story of the day. Said activist knocked on a door and a little boy, no more than 5 years old, opens door. Activist says is your mum or dad in to which he yells “muuuuuuuuuuuummmmmm” up the stairs. “What” comes the answer from upstairs. Activist pokes head in door and says “hello I am from the Conservative Party” to which response is “I am in the bath”. Activist replies with “well would you like me to come up?”
My thanks go to those who came from Tonbridge & Malling, Tunbridge Wells and London to help the Team.
Posted by Tracey Crouch at 14:54