It has been an extraordinary first week in the job.
On Monday I headed up to London to resign from Aviva. It was sad to leave a company I joined the day after the 2005 General Election and I have learned a lot working across all parts of the business. I am in no doubt my experience in the City and for a major plc will help me as I navigate my way through my new role. As I left the City to get on the tube to Westminster it was still unclear what was going to happen politically and it was difficult to give my curious now-ex colleagues much of a steer. When I arrived in Westminster I met up with Andy Percy, the MP for Brigg & Goole, and Gary Johnson, the MP for Dartford. We ended up doing our induction together which started in one room with the collection of passes, the allocation of a locker and ended up full circular with laptops and blackberries. Part of the induction included a tour and as we were taken into the chamber our blackberries started buzzing and it was then that we realised something significant was happening on the outside; Gordon Brown had announced he was going to step down as Labour Leader so that coalition talks between the Liberals and Labour could begin. The tour ended in the Members Tea Room where our guide left us in the safe hands of colleagues before our first ever 1922 Committee meeting. Journalists were gathering outside the Committee room with Whips guarding the door letting folks in. Walking into that oak panelled room for the first time was amazing. The sun was streaming through the windows from the Thames and the buzz in the room was phenomenal. The Chief Whip and the Leader of the Conservative Party entered and everyone cheered. I was at the back so had to stand on a bench to see and it was clear that even David Cameron was overwhelmed by the sight of 300+ Conservative MPs standing in front of him. After 30 minutes or so we filed out and that was that. What was needed to be said was said, the meeting was done, and it was time to go home.
Tuesday was supposed to be a full day of induction. There was a schedule set out in advance which given what was happening outside was probably never going to survive. But it was well planned and a 150 new Tory MPs sat and listened whilst we were given advice on employing staff, casework, legislative procedures etc. This is all new and the authorities and the party managers should be congratulated for setting it up. Previous new MPs have arrived and made to sink or swim. With such a large intake from this election it was never going to be possible to leave everyone to get on with it so we sat and listened intently. David Cameron popped by to say hello and as he walked in to the room he congratulated me on my win in Chatham & Aylesford – little did I know that the next time I would see him, he would be Prime Minister! And so the day continued until it became clear again that something was happening; without an office most of us were relying on others or Twitter to keep us updated and it was from there that we learned that Gordon Brown was going to see the Queen. Some of us found an office to watch the TV in and that is where we stayed until David Cameron stood on the steps of Downing Street with Samatha and made his speech. Two or so hours later he was standing in front of the 1922 Committee receiving a standing ovation from the Parliamentary Conservative Party. The Prime Minister outlined the “deal”, received another warm ovation and he (and we) headed off home at gone 10.30pm. 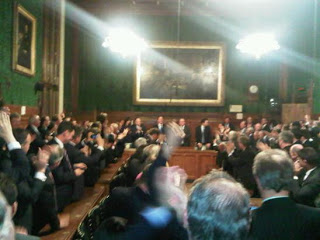 (taken by John Glen MP)
The Wednesday induction started with a cross-party session in the Chamber. Following the events of the night before there was much excitement as Conservative and Lib Dem MPs took their places on the Government side of the Chamber. Those who came in late were being sent to the Opposition benches because it was the only place there was any space left! We had some excellent advice and information from the Clerks, the Serjeant at Arms, and the then Leaders of the House from the 3 main parties. The number of times I have seen others squished up on those green benches watching them make speeches or ask questions, it was fabulous to take my seat and look at the empty Speakers Chair knowing that in a few weeks time I will be on my feet doing the same. After the session we had a 2010 intake photograph which was in itself rather special – there are so many people – before heading back to our own party inductions. I managed to leave around 4pm and made it back in time for pre-Cup Final football coaching. The rest of the week has been spent on constituency work, thank you letters, and setting up my surgeries.
I know every week is not going to be like last week but with the Speaker’s Election and swearing in happening this coming week, and the Queen’s Speech taking place the following week it might at least take a little while longer before things settle down!
Posted by Tracey Crouch at 14:42