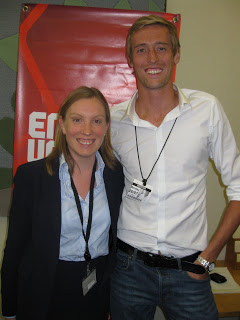 Today, the All Party Communications Group met to discuss Ofcom’s recent ruling forcing Sky to allow other pay TV providers to offer Sky Sports 1 & 2 to customers. The event, sponsored by BT, included a discussion between Martin Keown, the former Arsenal & England player, and Spurs striker Peter Crouch.Peter discussed the recent World Cup, Spurs’ forthcoming premiership, as well as investment in the grassroots, development for academies of talent, football finance and the number of English players and managers.It is often said that footballers are out of touch with what the fans think so it was good to hear two football giants talking about these issues in person and not differing too much from what the man in the pub says week after week.
Posted by Tracey Crouch at 17:46