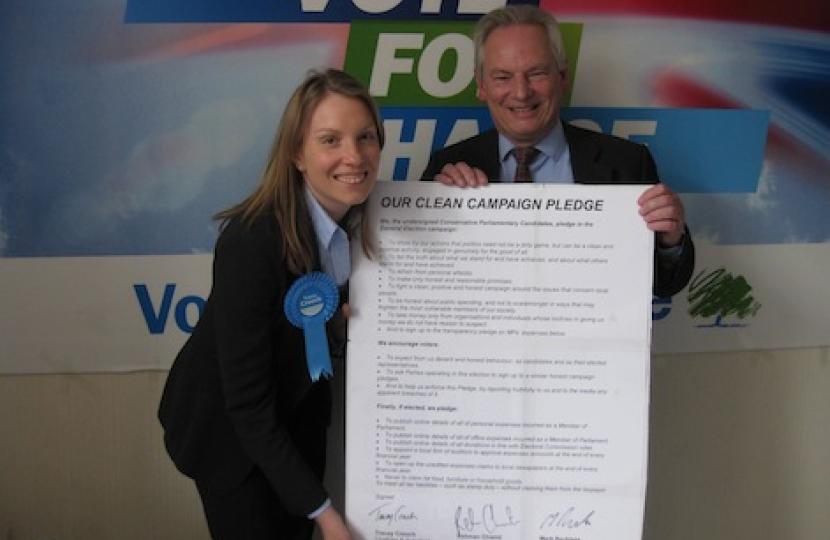 With the expenses scandal overshadowing British politics, it is important for candidates to try and restore voters’ trust and faith in politicians.  So as the 2010 General Election begins, Tracey Crouch, has signed a Clean Campaign Pledge providing voters with a clear personal commitment to behave responsibly and fairly during the forthcoming campaign period, and to uphold high standards if successfully elected to Westminster.

Tracey is joined in signing the Pledge by the other Medway candidates – Rehman Chishti and Mark Reckless. It covers 17 areas of professional and political conduct including key campaign commitments such as:

Chatham & Aylesford Conservative Candidate, Tracey Crouch, said: “Voters are fed up with politicians treating them with little or no respect.  The only way to earn voters’ confidence is for politicians to make, and keep, a promise to behave decently and honourably.  So today I’m making a personal and public commitment to run a clean campaign, free from dirty tactics and personal attacks.  People deserve politicians who will spend their time getting the country back on its feet rather than scuttling around in gutter politics”.

Gillingham and Rainham Conservative Candidate, Rehman Chishti, said: “I am delighted to signing this clean campaign pledge, along with Tracey and Mark.  Politicians need to earn public trust again; I am committed to fighting a positive transparent and clean campaign.  I hope all politicians of all political parties are able to sign this, as this can only be good for politics”.

Rochester and Strood Conservative Candidate, Mark Reckless, said: “I am delighted to be teaming up with Ray and Tracey to sign this declaration as I believe that, together, we will give the Medway area a new generation of forward-looking representation in Parliament, untainted by what has gone before.”