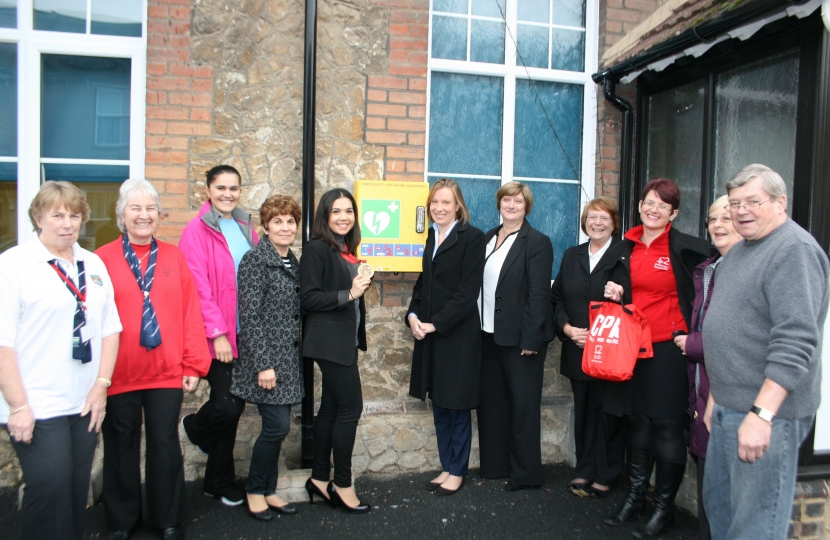 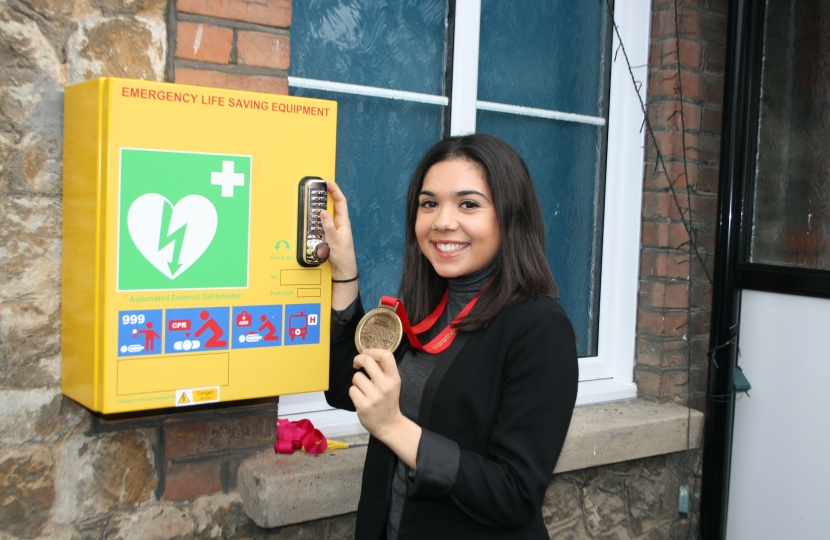 In April this year, Tracey’s constituency assistant, Georgina, ran the London Marathon in support of Tracey’s ongoing campaign to get more defibrillators into our local community. After completing the marathon in 4 hours and 35 minutes, Georgina managed to raise a total of £2570 towards funding these lifesaving pieces of equipment for the local community.

On Friday 21st  November, representatives from Cardiac Science, Borough and Town councillors, British Heart Foundation volunteers, Tracey and Georgina all came together to officially celebrate the community defibrillator, which has been installed at the Snodland Town Council Office on Waghorn Road.

This is a community defibrillator which has been installed in the external storage unit with a lock code. The code has been registered with the South East Ambulance Service and, when a 999 call is made within the area, the emergency service can direct callers to the box and give them the lock code in order for them to collect the Defib for use until an ambulance arrives. Local residents can learn about sudden cardiac arrest and familiarise themselves around the use of a Defibrillator via the following link: www.cardiacscience.com/cardiacademy/uk/

Tracey said: “The importance of having a Defibrillator in the case of a cardiac arrest can really be the difference between life and death, which is why I am continuing to campaign to get more of these lifesaving pieces of equipment fitted in our local schools and in central community areas, such as town centres. I am very proud of Georgina for her marathon success and her support in this campaign, she has literally gone the extra mile in supporting my work. It can often take a little longer than 8 minutes for an Ambulance to arrive on time, which is why it is reassuring to know that this community defibrillator is accessible to the public in the event of such an emergency.”

Georgina said: “I am really pleased to have secured a piece of this life saving equipment for my hometown. Having worked on the campaign with Tracey, I wanted to ensure the local town centre had a Defibrillator nearby should it ever need to be used. A big thanks to all the council staff who worked with me to get this installed on site- it really is great to see where my marathon fundraising is going!”

Statistics have indicated that between April 2013-April2014, there were 13 calls to the South East Coast Ambulance regarding Cardiac emergencies in the Snodland area (ME6 5 postal area). A Cardiac Arrest victim’s chance of survival increases significantly from around 5% to 75% if they receive good CPR combined with therapy delivered by a Heart Defibrillator within the first 3 minutes after a Cardiac Arrest. For every minute that passes without defibrillation a Sudden Cardiac Arrest victim’s chances of survival decrease by between 10% & 12%. A simple calculation shows that the victim’s likely maximum chance of survival in reality is between 8 & 10 minutes after the Cardiac Arrest occurring. With the current Ambulance target response time of 8 minutes, time is of the absolute essence and acting quickly with appropriate therapy, essential.

So far, Tracey has secured funding for defibrillators for all the secondary schools in her constituency who wanted one, this includes two sports colleges where additional community use of facilities is increased. Chatham Grammar School for Boys, Aylesford Sports College, Greenacre and Walderslade as well as Holmesdale Technology College. This could not have been made possible without support from local councillors, the school children, Asda Chatham & The Gallagher Group as well as support from Community First. Tracey has also secured funding for a local Rugby Club to have a Defib fitted in Aylesford.

Tracey is now working with local councillors on the adopt a phone box scheme to get defibrillators housed in our villages.

This truly is a community driven campaign which would not have got off the ground without the support of schools, local councillors, local business, local supermarkets, Cardiac Science and South East Coast Ambulance Service and of course Georgina’s donations.