It is half time in the rugby world cup final so I thought I’d update my blog. Last night local Conservatives took a table at the KM charity quiz. Despite not winning, we all had a great evening. The sports round we did quite well on, and rather surprisingly also the entertainment round. We played our joker during the current affairs round but were somewhat surprised when the questions were “what did Charlotte Church name her baby?” and “what number did Bobby Charlton wear on his England shirt?” Since I gave an interview in my Blackpool hotel room for the main quiz sponsor KMFM, I was at least able to answer “where was this year’s Conservative Party Conference?” 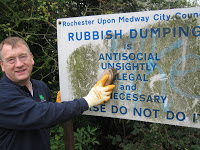 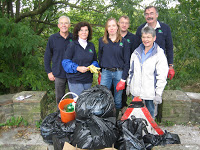 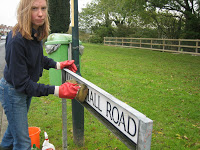 Today, the team responded to a request from some of the returned surveys we sent out recently and went to Coney Banks to clear up litter from the around the woods, the footpaths and football pitches. In the space of an hour we’d filled 10 bin bags and cleaned off lots of graffiti from local signs. We met 3 dog walkers, one of whom spent 15 minutes telling me he was never going to vote Labour again because Gordon Brown had robbed him of £4000 from his pension. The sad truth is that it isn’t the first time I have heard people tell me this and I know it won’t be the last.
Posted by Tracey Crouch at 20:51