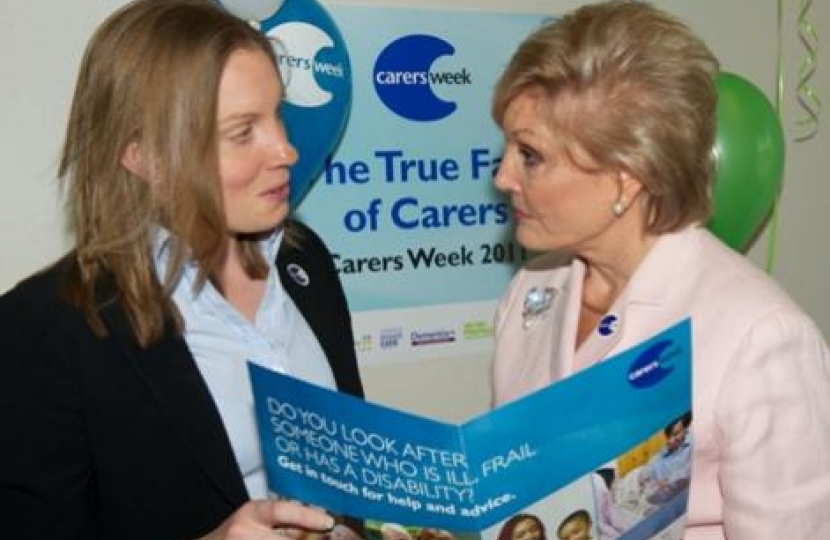 As Carers Week (13-19 June) draws closer, Tracey has teamed up with TV presenter Angela Rippon to show support and recognise for the contribution made by those people in Chatham and Aylesford, and throughout the UK who provide unpaid care for someone who is ill, frail or disabled.

The theme for Carers Week 2011 is ‘The True Face of Carers’. It calls for greater recognition for the diverse range of people who have caring responsibilities. The work they carry out is vital for their families and friends, and for their communities.

Tracey met with Angela at the House of Commons to pay tribute to carers, and to urge that they receive more support in their caring roles. Tracey said:

“Thousands of people in Chatham and Aylesford sacrifice not only their time, but also their money and their health in order to care for a loved one. Together they save this country an astonishing £119 billion. They deserve to be recognised for their contribution to both our local community and to wider society.”

“I am taking part in Carers Week to show my respect and appreciation for our carers. I also want to let them know that there are services out there to help them. Caring can be so incredibly demanding. It’s important that carers know that they don’t have to struggle on alone.”

Angela Rippon has personal experience of being a carer. She said:

“For a number of years now I’ve become aware of the extraordinary job that carers do throughout this country. I feel that it’s important that anybody who has any knowledge at all stands up and be counted for them and make the job that they do public, because they should not be invisible, they should be out there and being seen as the heroes and heroines that they are.”

“It’s a strain that people accept willingly and lovingly, and if they’re prepared to do that, I think that as a civilised nation we should be prepared to do something in return.”

To show your support for Carers and for more information about local events and activities taking place as part of Carers Week, visit www.carersweek.org.