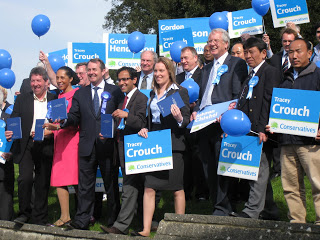 I have really enjoyed campaigning today.
I woke to discover that the photo shoot I did with Grazia magazine back in February is in this week’s edition (I still pine for the LK Bennett shoes I chose to wear for the photo shoot but are too expensive for me to buy!) and the feedback has been good.Then we had a really good reception in Wouldham during this morning’s canvass. Lots of people out in their front gardens making the most of the spring sunshine. We did pause for a while and take in the view of the river, trying to spot the rumoured seal or otter – I am sure it is long gone by now but it was nice to have an excuse to stand quietly and gaze up and down the river for a few minutes! 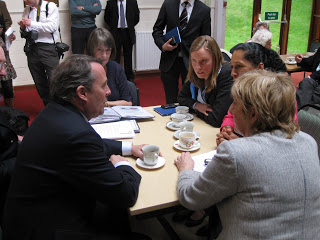 The after lunch, Conservative Defence Secretary Dr Liam Fox joined veterans, cadets, Gurkhas and those with sons in the Armed Forces for a coffee and a chat at the Royal British Legion Village. The veterans, who were wearing their medals with pride, talked to Liam about their concern for today’s soldiers – an issue I have talked about with them many times. They are genuinely concerned about the lack of equipment and wanted to know what a future Conservative Government would do to protect our forces as best as possible. Liam also met some cadets, all of whom were looking to go into the Air Force or to use the skills they have gained from their training in other occupations. He also met Cllr Tashi Bhutia and fellow former Gurkhas and having congratulated Tashi on winning Luton & Wayfield he then told them of his trip to Nepal quite a few years ago – they were very pleased to hear him speak about his trip so fondly.
Then followed the formal launch of the Conservative Party’s manifesto in the South East Region. I am pleased with the manifesto; not only is it well presented but it gives power back to the people. I’ve lost count of the number of times I have talked to medical staff, teachers or police officers who are horrified with the pointless strategies or targets coming out of Whitehall that disable their ability to do the job that they signed up to do; this is designed for them. Let the professionals do their job. Since I am pretty sure that most of Whitehall has never heard of the villages and towns that make up Chatham & Aylesford I am fed up with hearing how Government knows best for its residents. Therefore what David Cameron and the Party has launched today is I think a very exciting opportunity for people to help bring about the much needed change this country needs.
After Liam departed, we headed off to Larkfield to finish the day canvassing. The news bulletins were on in the background as we knocked on the doors and I was very very pleased with tonight’s response. The undecideds from a few weeks ago are firm supporters now – the excellent first week of the campaign has helped and today’s positive launch seems to have nailed it with some. The change message is getting across.
Posted by Tracey Crouch at 21:08