A Budget for Growth, Jobs and Families 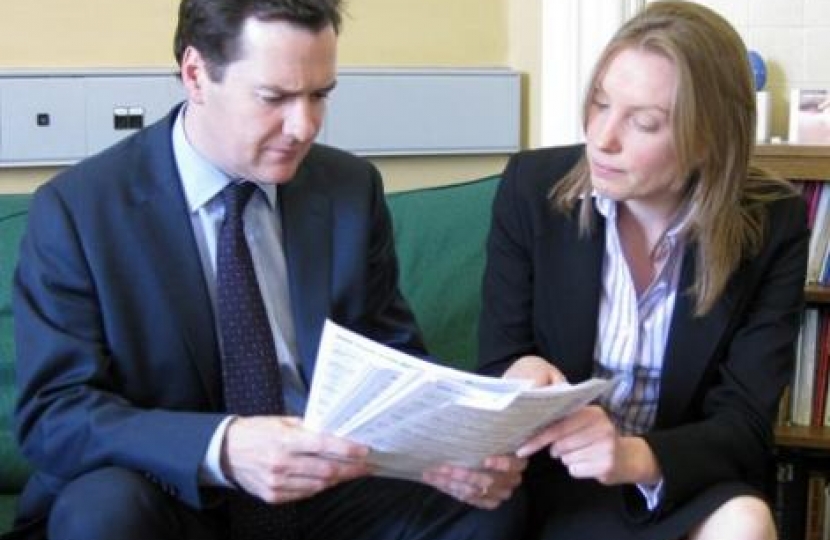 Today’s Budget, set out in the Commons by the Chancellor George Osborne, took real steps to help families with the cost of living – including an immediate cut in fuel duty – and outlined real reform for the economy with measures to support jobs and growth.

Key measures in the Budget to boost growth include:

A cut in fuel duty by 1 pence per litre from 6pm tonight and delay April’s inflation rise in duty to next January. This means fuel duty is 6 pence lower than it would be under Labour. Plus the Government will introduce a Fair Fuel Stabiliser to tax oil companies more to stop above inflation rises in fuel duty, welcome news for private and commercial motorists across Kent;

Increase the Personal Allowance from by a further £630 from April 2012. That’s another real increase of an average of £48 extra per year, or £126 in cash terms. Together with this year’s rise, that means a total of £326 extra each year for those working hard to support their families. Plus it means, just ten months into office, the Government has taken 1.1 million low paid people out of tax altogether, including 32,000 in the South East;

Tax cuts for businesses and entrepreneurs, including corporate tax and the extension of the business rate relief holiday, and the scrapping burdensome regulations;

Radical reform of the planning system and new investment in science and innovation; and More support for young people with additional apprenticeships and work experience places which will benefit 8,400 young people across the South East.

Welcoming the Budget, Tracey said: “The Government is right to stick to the plan to get Britain living within her means. This year’s Budget sets out plans to back enterprise and get Britain manufactoring again after being decimated by the last Government. Cutting fuel duty immediately and cutting income tax for millions the Chancellor will help families now.

In the South East, 59% of properties have a rateable value of up to £12,000. Those with valued up to £6K will pay no business rates thanks to the extension of the small business rate relief, and those who pay up to £12K will receive significant reductions which I know from my postbag that many businesses across Chatham & Aylesford will welcome”.

Measures announced in the Budget to promote growth include:

Sweeping changes to the generosity, simplicity and reach of the Enterprise Investment Scheme, with an increase in the income tax relief available from 20 per cent to 30 per cent; plus a doubling the size of the Entrepreneurs Relief to £10 million.

An extension of the small business rate relief holiday until October 2012 – over half a million eligible businesses will continue to benefit from reductions in their bills, with approximately 330,000 businesses paying no rates at all.

21 new Enterprise Zones with up to 100 per cent business rate discount, new superfast broadband and the potential to use enhanced capital allowances for zones with a strong focus on manufacturing

A new £250 million shared equity scheme, First Buy, in England this will help 10,000 first time buyers get on the housing ladder for the first time.

50,000 additional apprenticeships, bringing the total funded by this Government to 250,000 over the next four years; 100,000 work placements for young people; and a doubling of the University Technical Colleges programme to create at least 24 new colleges

Measures to help families and make our tax, pensions and benefit system fairer include:

1 penny per litre cut in fuel duty from 6pm tonight, abolition of Labour’s fuel duty escalator and replacing it with a fair fuel stabiliser that increases tax on North Sea oil when production prices are high, and delaying inflation increases this year and next

A further increase in the personal allowance of £630 in April 2012, taking 260,000 more people out income tax and reducing the tax paid by 25 million people by an average of £48, without creating any more higher rate taxpayers. Together with the £1,000 rise happening this April, it means an extra £326 a year for hard working families, while over 1.1 low paid people have been taken out of tax altogether.

A crackdown on tax avoidance to raise an extra £1 billion a year by closing down schemes which disguise remuneration, and avoid corporation tax, VAT and stamp duty

A 10 per cent cut in inheritance tax for estates leaving 10 per cent or more to charity. No beneficiaries will be better off, but we expect charities to gain £300 million.

Introduction of a new scheme where Gift Aid can be claimed on small donations, up to a total of £5,000 a year, without the need for donors to fill in any forms.