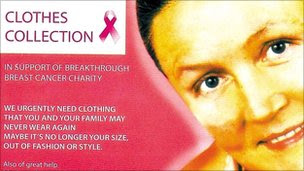 I am sure that many people were as shocked as me after the recent report by BBC South East exposed bogus charity clothing collectors operating in Chatham and other parts of Kent and Medway. On this occasion they were doing so under the guise of Breakthrough Breast Cancer but other charities have been victims in the past. The recent flyer for Breakthrough Breast Cancer looks perfectly normal – it uses corporate branding, there is no dodgy spelling, it has a registered charity number and outlines the contribution from each bag to charity. The only problem is, the leaflet is fake, and the only way someone would know that is if they rang the number on the flyer. If I am totally honest, I would have been duped by the flyer.
However the impact of these bogus collections on genuine charities is immense. Not only does it mean people become more sceptical about donating clothes in collection bags, but it deprives them of much needed funds. I have tabled some written parliamentary questions on this matter including how much it does cost charities each year, but the estimate banded around on the Internet is that it is somewhere in the region of £5 – 14m per year. This is shocking but not as much as perceived lack of interest from enforcement agencies. Because it appears to be such a small crime, it is not a police priority. However given its cost, the organised nature of the crime and the fact that many clothes are being exported for cash, I would say it is very serious indeed.
It was for that reason that I tabled the following motion in Parliament:
“That this House condemns the activities of fraudulent charity clothing bag collectors who abuse the goodwill of those who donate clothes for good causes; recognises that this organised crime is becoming a nationwide issue; expresses concern that these activities undermine the valuable work of genuine charities, depriving them of millions of pounds worth of donations per annum; and calls on the Government to ensure that local police authorities tackle the criminal gangs responsible and facilitate the strict enforcement of the House to House Collections Act 1939 and punishment of those found in breach of the Act”.
I hope to secure a debate in the next few weeks to raise this issue with a Minister direct but I will not rest until this issue is being taken seriously by the authorities and people can donate to charity collections safe in the knowledge that it is genuine.
Posted by Tracey Crouch at 15:36

How about also adressing the problem of fake charities that receive funding from the tax payer? Organisations like ASH and the Alcohol "charities" who receive our money then use it to pay bigoted spokesmen to come on the TV and radio to berate us about our lifestyles. Let them get out with the collecting tins and see how much people will donate to them.It is obscene that organisations like ASH are being funded by the taxpayer while cuts are being imposed on worthy orgainsations like the Gurkah Regiment, schools, libraries etc.

The problem is many people see a professional looking leaflet and a charity number and assume it's genuine. Bogus charities are getting more and more sophisticated so you have to be careful. I never give to door to door charity collections because of this. Instead I take it to a charity shop. The sad thing is many would give, but won't take the time to take items to a charity shop, so end up not giving at all.

We at the Fundraising Standards Board, the UK’s self-regulator for fundraising, are also extremely concerned by the number of bogus charity bag collections which are being reported to us. We will be addressing these issues with our contacts within Trading Standards to try and raise these types of complaint up the agenda in terms of enforcement. We also aim to encourage the charity sector to work together to highlight to the public how to avoid being caught out by these fraudulent collections. One of the ways in which the public can currently do this is by looking for our tick logo which is used by our membership to show their commitment to best practice in fundraising. To find out more visit www.givewithconfidence.org.uk.

My name is Paul Ozanne and I am national recycling coordinator for Salvation Army Trading Company Ltd (SATCoL), the UK’s leading textile recycling company. SATCoL is a trading arm of The Salvation Army in the UK, to which we gift-aid our profits to help fund its charitable work. As well as over 4,800 clothing collection banks, we operate a door-to-door clothing collection scheme in which we distribute around 800,000 bags per week throughout the UK. We were very pleased to learn of the parliamentary debate on October 13th. As an organisation we work hard to gain the trust of the public and feel strongly that less reputable collectors threaten to damage the goodwill that genuine operators have built up. Also, from an environmental point of view, anything that discourages people to recycle their unwanted clothing may also lead to an increase in textiles that end up in landfill, which can be extremely harmful.We would encourage members of the public to check with their local trading standards office if they are unsure of the legitimacy of bags that come through their doors. Organisations like SATCoL rely on the generosity of the public and whilst taking your unwanted goods to a charity shop is a good way of donating, we believe that doorstep bags are more convenient for some people. It would be a real shame if people were put off donating to genuine organisations in this way because of the activities of these bogus collectors.For more information on SATCoL and our clothing collection scheme please visit our website at www.wear2bank.co.uk.