98% say YES to Save Capstone Valley 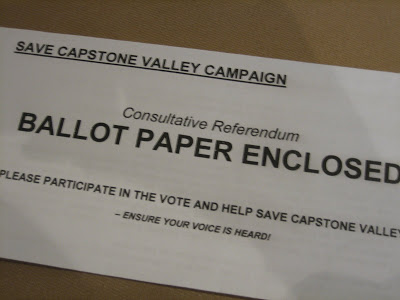 At the end of September, I launched a consultative referendum on Medway Magna’s plans to build 9,200 houses in Capstone Valley. Throughout October people have been returning ballot papers, delivered and paid for by Chatham & Aylesford Conservatives, and today the “Count” on the Referendum took place at Lordswood Leisure Centre. We had an excellent response to the campaign which has significantly raised the profile of the threat to Capstone Valley. A number of people have contacted me direct, stopped me in the streets or spoken to local councillors to voice their concern and offer their support for our campaign. It is quite clear that whilst people understand that there is housing stress in the area, building on one of the last remaining green spaces in Medway is a dreadful idea which will see a real impact on local services, and increase in traffic and a major blow to the environment.We had 3238 ballot papers returned to various drop off points around Chatham and the results were as follows:
“DO YOU WANT TO SAVE CAPSTONE VALLEY?”
YES 3176
NO 21
VOID 31
TOTAL 3238
So Medway Magna should take note. Local people will not sit back quietly and let Europe’s largest housing estate be built in the beautiful Capstone Valley.
Posted by Tracey Crouch at 16:14