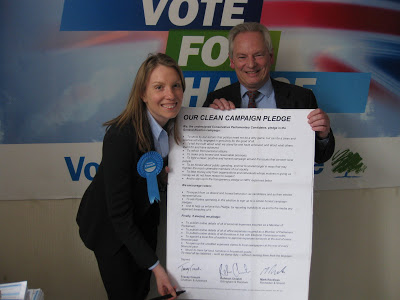 During the election campaign I signed up to the Clean Campaign Pledge part of which was a promise to regularly publish my expenses online. I aim to do this monthly on my website and have now uploaded all my expenses to the end of November, which can be found HERE.
Posted by Tracey Crouch at 12:37 No comments:

Last week I tabled a parliamentary motion calling on Ofcom to release a Medium Wave frequency for Radio Caroline to use in the South East. The station is by far one of the most well known radio stations in the world, is a cornerstone of British radio history, has had 2 current MPs DJ on it, and unbelievably will celebrate its 50th birthday in 2014. However it has been denied an opportunity to secure a MW frequency so that listeners can enjoy the station in transit, rather than via the internet or through Sky TV. With unused frequencies on license to France and the North East, there is a perfect opportunity for Ofcom to release a platform so that loyal listeners, and many many have been in touch since I tabled the EDM, will be able to carry on enjoying Caroline’s music through their radios.
More information about Radio Caroline’s campaign can be found HERE.
UPDATE: Richard Bacon MP just asked Ofcom during a Select Committee hearing if they will speak to the French broadcasting equivalent about releasing a frequency. They agreed to do so. Watch this space.
Posted by Tracey Crouch at 12:20 9 comments:

My first 3 months of expenses

The Independent Parliamentary Standards Authority today published the expenses of all MPs for the first 3 months after the election. Mine can be found on my website HERE. The first 3 months are front loaded with office start up costs and, rather than wait for IPSA’s timetable, I will next week publish all my expenses to date which will show a more accurate update of what taxpayers money has been spent on.
Posted by Tracey Crouch at 18:17 No comments:

Abandoned Vehicles in the Snow

Earlier this year, I wrote about vehicles that were abandoned on and around Bluebell Hill being towed and pounded in Sheppey, with owners asked to fork out £150 plus a daily £20 in order to have them released. With the snow again causing local chaos, the police issued a warning to motorists that abandoned cars would again be towed.
It was with that in mind that I wrote to the Chief Constable asking for some common sense when taking cars away. Whilst of course cars left in a dangerous place should be removed, all vehicle owners should be contacted in advance (unlike last year) and if possible a local pound should be used. Given that Sheppey is prone to getting cut off in adverse weather conditions, and there is no local public transport direct to the Island, it is totally inconvenient for motorists to be able to reclaim their vehicles. 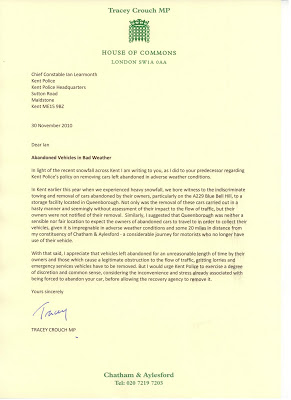 Hopefully the police will learn the lessons from January and apply a more common sense approach to abandoned vehicles. In the meantime, take care on those roads.
Posted by Tracey Crouch at 10:13 No comments: