It has been so busy at work that I have been at my desk by 7.45am all but one day this week. The reason was partly to do with the Chancellor’s Pre-Budget Report on Wednesday. Big business had read the speculation in the run up to the Statement with some trepidation but as one commentator said the day after the City responded with a collective shrug of the shoulders. But having now examined the so-called Green Book it is clear that the rest of us will suffer as this Government has basically run out of ideas to fix the mess that Gordon Brown got us in.The Government’s proposals include:· National Insurance hikes on workers meaning a smaller pay packet for anyone earning £20,000 or more.· National Insurance hikes on local firms, making it more expensive to pay staff.· Higher income tax, pushing more middle income earners into the 40 per cent higher rate.· Inheritance tax rises by stealth, taxing people more as house prices start to rise.· Higher stamp duty, meaning the average first time buyer will now pay £1,475 in stamp duty.· A new telephone tax on anyone with a phone or fax line.· Forcing councils to make more cuts to rubbish collections and pushing up council tax.The only impact the Pre-Budget will have is to hike up taxes for the hard working families across Chatham & Aylesford. There was a suggestion that there would be an early Election because the Chancellor and Prime Minister would not want to hold another Budget – good – bring it on because this Labour Government will not doing anything to sort out the worst debt crisis this Country has ever faced.
Posted by Tracey Crouch at 18:16 No comments: 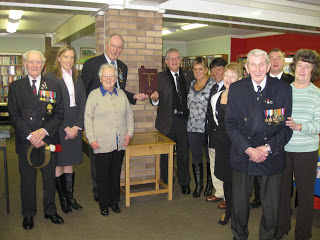 This morning I joined Conservative Councillors Tashi Bhutia and David Wildey and Independent Councillors Tony & Val Goulden at an event to unveil the new display in Luton Library for a Book of Memorial remembering those from Luton who died during the World Wars. The Book was previously hidden away but with help from Cllr Tony Goulden a wonderful display has been built so that the whole community can share the memories. Local resident Don Phillips, who has campaigned for and then practically built the Luton Memorial Meadow, led a minutes silence today for our fallen heroes in all conflicts including Afghanistan and Iraq. It was a touching event and I hope people will make the most of the Book being in the library.
Posted by Tracey Crouch at 17:57 No comments:

Bullying and the shocking stats

Official Government figures have revealed that just ninety pupils across the Country were expelled last year for school bullying, despite a new survey finding half of all 14-year-old children have been bullied.Across Kent, 10 pupils were expelled last year from all state schools. In over two-thirds of local authorities across England, including Medway, not a single child was expelled for bullying. However in Kent 260 pupils and in Medway 40 pupils were suspended from state schools – meaning the disruptive students returned to the school where they caused misery and fear for their classmates.Since 1997, Labour Government rules have deliberately made it more difficult for schools to expel pupils, undermining the authority of head teachers and meaning bullies end up back at the same school as their victims.Bullying makes far too many children’s lives a misery – I have been contacted by parents whose children have been bullied, including being physically beaten up! But the Government’s own figures show that in the vast majority of cases bullies are returned to the same school as their victims after a short punishment, rather than being expelled. I firmly believe that the key to tackling bullying is giving our teachers the powers they need to crack down on bad behaviour. Schools need the power to take a zero tolerance approach towards serious offences such as bullying so that they can maintain discipline in the classroom before it spirals out of control.
Posted by Tracey Crouch at 18:58 1 comment:

After an early morning campaign meeting and a quick delivery of newsletters in Larkfield, I went to see two residents who had requested to meet me. The meeting lasted two hours and was fascinating, demonstrated by the fact that 24 hours later I am still thinking about much of what we discussed. Much of the conversation concentrated on religion and in particular Christianity. I consider myself to be a Christian, although I don’t go to church very often, and I would never justify my politics through my religious beliefs like Tony Blair and George Bush often did – not least because, as I explained to the residents, my views on social issues are somewhat liberal and therefore contradictory to more conservative Christian views. Our discussion about the unintended impact on religious thought/practices of political and legislative change was very thought provoking. I am glad I took the time to do the meeting – I am sure it will stand me in good stead in the future.
Posted by Tracey Crouch at 18:45 No comments: