What a grotty day to play football…

…especially if you are an under 11 girl!I remember how much I hated playing in the wind and rain whilst watching the girls today. Rain is ok but wind and rain together is most definitely not. Anyway despite the horrific conditions the girls managed to win 3-2 against a spirited Rainham Kenilworth thanks to the last minute poaching instinct of our right winger. Along with all the parents I was soaked at the full time whistle and my hair looked like I had been dragged through a hedge backwards. Not quite sure how but I have ended up with drafting the match report and washing the rather stinky training bibs – my house is looking fetching with 12 little luminous yellow bibs hanging over every possible radiator!! I bet Harry Rednapp and Joe Jordan don’t have to do this…
Posted by Tracey Crouch at 16:09 No comments: 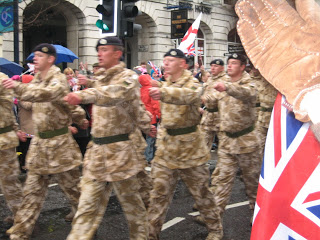 I am absolutely delighted that Chatham has been chosen to host the main event for the first ever Armed Forces Day in the UK. The event in Chatham, which will see senior military commanders join the Royal Family and Government ministers at the Historic Dockyard, will allow people from all over Kent and the South East to honour and celebrate our troops for the hard work they do. I for one believe we do not do enough for our troops – a belief that was shared by the youngsters I met at Mid Kent College on Thursday. Whilst this is an excellent step forward, and an exciting one for Chatham, I think there is still a long way to go before we treat our soldiers, sailors and air force personnel with the same respect that other countries, like America, do. But in the meantime, put the 27 June into your diaries and head on down to Chatham to join me in showing the men and women who go to war for their country how proud we are of them.
Posted by Tracey Crouch at 17:58 1 comment:

We had another good group of 7 volunteers out today in Larkfield and we managed to cover the Tree Estate. The response was very positive on the doorstep and most people we spoke to were pleased to see us out enquiring about local issues we could help with. As an additional bonus, having picked up the keys to my new house yesterday I rather usefully met a local window cleaner (who doesn’t go as far as Aylesford but had a contact) and a local builder (who gave me his business card). No lunch today as everyone appears to rather belatedly have started their New Year’s diet…mind you given how desperately sad everyone looked as they departed for their homes hungry and thirsty, I am pretty sure we’ll be back in the local pubs next week!!
Posted by Tracey Crouch at 17:17 No comments:

Phew! What a busy day… 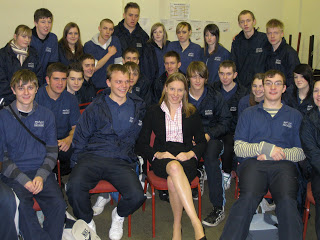 I have had one of those great days as a candidate where you feel a bit like an MP already. I started today by speaking to students at Mid Kent College. This is the third time I have been along to see the public service students and they were a great bunch. My opponent went to speak to the same students a couple of weeks ago and so I think they were a bit surprised when a woman in her early thirties with a Kent accent and a normal background/life walked in as the Conservative candidate. I only spent a few minutes talking about how you become a candidate before we went into questions and so I knew that I had done OK when we started to run late and many students still had questions. And to be fair they were asking some excellent questions ranging from what is the Conservative Party going to do about police, fire services, immigration through to the support we give to our troops, bus fares and community facilities for youngsters. We had a couple of photos taken at the end but I wanted to post this one above because the lad in the front row had me in stitches when he did one of those fake yawns in order to put his arm around the back of my chair that you usually only see in teen movies.

After leaving Mid Kent College I went to Bridgewood Manor Hotel for a meeting with the Shadow Health Secretary Andrew Lansley and local GPs and Dentists. The meeting started with a very interesting conversation about NHS Dentistry and ended an hour later on GP Commissioning. The meeting came about after my local survey raised some interesting issues and we managed to discuss some of them, such as availability of NHS dentists and after-hours care, directly with the practitioners.

Following the meeting with the doctors and dentists we headed up to the Medway Maritime. We were due to arrive at 2.45 and left with plenty of time to spare – however what we hadn’t calculated for was our arrival coinciding with visiting time so we ended up getting stuck in traffic and being late! The Chairman came and met Andrew in the car and so he managed to have half the meeting in the jam before eventually arriving for the tour of Kingfisher Ward. We then had almost an hour with some of the hospital directors which gave us a fascinating insight into some of the issues the hospital faces and what needs to be done about them. Finally Andrew was whisked down to the Hospital Radio studio where he did an interview for BBC Radio Kent, KMFM, the Kent Messenger and of course the Hospital Radio. Although the whole afternoon over-ran I think we both found it incredibly useful.
Once Andrew was safely en route back to London I headed down to Aylesford for a campaign meeting followed by my Association’s Executive meeting. Tomorrow is slightly less busy – I am picking up the keys to my new house in Aylesford, before heading down to Folkestone to put some flowers on my gran’s grave, see my Dad and his mad Labradors and then having a coffee with Michael Howard…
Posted by Tracey Crouch at 22:50 1 comment: 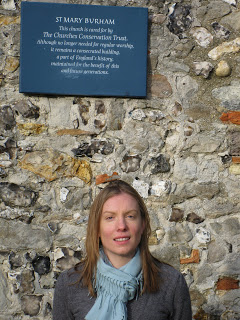 A group of 9 went out canvassing this morning in the Kent Village of the Year, Burham. It was a lovely sunny day but the wind caused a few comedy moments with helpers chasing canvass sheets down the road. Since there were so many of us we managed to canvass practically the whole village before stopping for lunch at the Golden Eagle pub. I had an excellent session and was very pleased with what people were saying about me, the Conservative Party and how, because of the awful state the country is in, they had already made up their minds about what they intend to do at the next Election. I am getting this more and more now on the doorsteps which is quite surprising because the election could in theory still be 18 months away. I got a real sense of people’s desperation for change today – perhaps it has been there for sometime but now people feel more able to talk about it openly, or maybe it is just beginning now the recession is biting. Whatever the reason the desire for an election was definitely there today.
I was also very pleased with how many people I spoke to who were aware of David Cameron’s visit to the constituency last Monday. They seemed impressed that he had come to our part of Kent to listen to what people had to say rather than do a quick photo opportunity and then leave again.
After lunch I had a wander around St Mary’s church, a Norman building sited near the River Medway in old Burham, that is now looked after by the Churches Conservation Trust. It has a wonderful tower added to it in the 15th Century which is apparently very typical of Kent churches. The Church looked splendid in the bright winter sunshine and because it is at the bottom of a valley it was incredibly quiet meaning we could look around totally undisturbed. 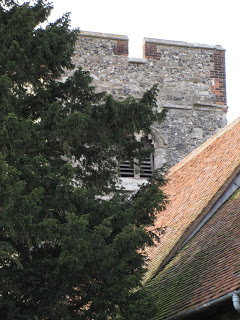 Posted by Tracey Crouch at 18:20 No comments:

New Campaign Video from the Conservatives

Posted by Tracey Crouch at 09:23 No comments: 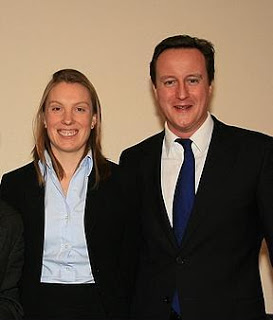 This evening David Cameron, Leader of the Conservative Party, held a “Cameron Direct” meeting at The Church of Christ the King in Princes Park with 200 local residents. He was suffering from an extremely sore throat but even so he managed to stay on stage answering questions from the audience for a good hour. Iain Dale blogged live and his subsequent report on the event can be found HERE. I shall link the webcast as soon as it is available.Cameron Direct is an opportunity for non-Conservative voters to ask David Cameron any question they like on any issue they want. This evening David was asked 21 questions which varied from Afghanistan through to knife crime. The audience was made up of mixed age groups and several first time voters, including members of the Medway Youth Parliament and sixth formers from local secondary schools. I felt that the audience reaction after the meeting was extremely positive with many people coming up to me afterwards clearly enthused by what they heard. Let’s hope they liked the evening enough to come out and vote Conservative at the General Election…whenever that might be.
Posted by Tracey Crouch at 22:36 No comments: 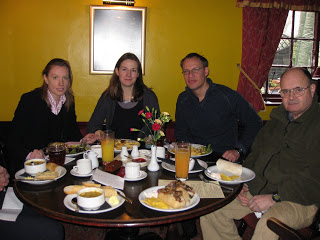 When I got into my car this morning it said it was -3 on the temperature gauge, it took me 5 minutes to scrap the ice off my car and then it started to snow. So I was slightly nervous about how many people would turn out this morning for a campaign session in Larkfield. I need not have worried – we had 7 and as a result we managed to cover a huge area. As always I thoroughly enjoyed our morning canvass and got to meet lots of really interesting people, and whilst the conversations were understandably shorter due to the cold, the reception was very warm. Many were aware of David Cameron’s forthcoming visit and some are attending so am looking forward to seeing them again.Despite wearing 5 layers (vest, shirt, jumper, suit jacket, overcoat), scarf, gloves and furry lined boots I and the team were forced to retire after two hours, just before frost bite set in, and headed off to a warm pub for lunch. Two cups of coffee and a ham, egg and chips later I finally began to feel the ends of my fingers but the morning spent in the cold was definitely worth it.
Posted by Tracey Crouch at 18:41 No comments: 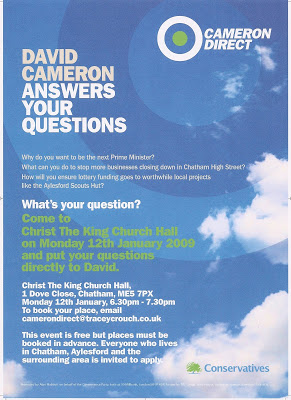 David Cameron is doing his first Cameron Direct in Kent here in Chatham & Aylesford next Monday. Cameron Direct has proved to be a really popular event whereby he comes face to face with so far undecided voters and the feedback has been amazing. I am of course delighted David Cameron is coming to the constituency not least because it is a fantastic opportunity for anyone of any political persuasion to come along and raise their issues, questions and concerns with him. Members of the public set the agenda for the evening so whether the question, issue or concern is about the global economic downturn or local anti-social behaviour, it will be answered by David Cameron in person.

For local readers of this blog, tickets for the event are free but have to be obtained in advance by emailing [email protected]

Popular political blogger, friend and all round good guy Iain Dale has posted two twitterings in the last 24 hours – one HERE about how he hoped Spurs would lose to Wigan and one HERE about helping fellow candidate Simon Jones deliver newspapers in Dagenham today.Coincidentally Simon and I are friends and fellow Spurs fans and went to the game last night (shockingly my first home game of the season) and watched Spurs win 3-1 to proceed into the next round of the FA Cup. So the following picture is dedicated to Iain’s twitterings… 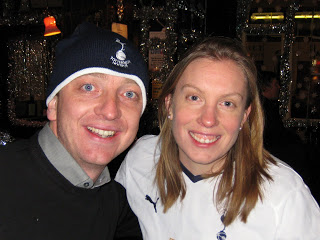