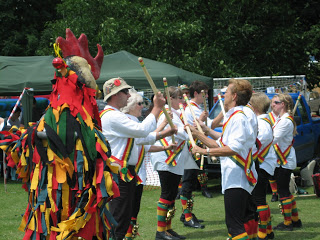 This weekend I have one of my oldest school friends Chloe, and her new husband Martin, are staying with me whilst they are on holiday from New Zealand. Chloe emigrated about 8 years ago and this is her first trip back to the UK for sometime. So how better to reintroduce her to English life than by taking her to the Aylesford village festival to watch Morris and belly dancing, eat a hamburger prepared by the local scouts, and hook a duck from a swimming pool to win a bow and arrow. Thankfully, and unlike last year, the weather was glorious so an amble stroll around the festival, looking at the Kent produce for sale wasn’t too much like hard work for my visitors from the southern hemisphere!
After Aylesford we headed up to Lordswood for the Community Fete at the Kestrel Avenue shopping centre, which was smaller but well attended. When I left the local youth worker Andy was painting a huge mural with some youngsters from the estate to hang on the outside of the youth club – it was looking good and can’t wait to see it up.
As the offical national day of Fetes draws to a close, I am now back indoors giving my friends the attention they deserve – especially as they are on their honeymoon…!
Posted by Tracey Crouch at 16:57 1 comment:

This year marks the 60th birthday of that great British institution, the NHS. To celebrate this milestone, and to show support for the doctors, nurses and other NHS workers who play such an important part in all our lives, the Conservative Party has created an online birthday card for you to sign. We have all benefited from the NHS’s care at some point, so please join me in wishing many happy returns to everyone involved with this vital institution.
Posted by Tracey Crouch at 20:49 1 comment:

Sorry for the silence

My apologies for blogging silence. After spending Saturday in Wayfield, and then Saturday evening at the presentation night with my under 1o girls football team, I headed off to Wales early Sunday morning for a 90th birthday party and only got back yesterday afternoon in time for the launch of the new political lifestyle magazine Total Politics. The magazine is published by Kent blogger Iain Dale and will be available from most major newsagents. Alternatively, the new Total Politics website can be found HERE. Sadly as a result of being at the family party I was unable to attend the launch of “Let’s go Karting” at Buckmore Park, hosted by Formula 1 legend John Surtees, where youngster aged between 8 and 16 will be able to get behind the wheel for £5 in an attempt to find the next Lewis Hamilton or Jensen Button. I wish the scheme every success and hope that it attracts many local kart enthusiasts to test their skills.
Posted by Tracey Crouch at 21:07 No comments:

Have just got back from a busy day out and about which started off in Lordswood this morning to help deliver my latest newspaper followed by a meeting with residents in Luton over car parking issues. Then this afternoon, I headed over to Blue Bell Hill for their summer fete which this year was on a Wild West theme. Unfortunately, as the vicar explained, their PR operation hadn’t really kicked in so the only people who knew it was Wild West were the Committee! Still the huge cowboy straddling the entrance to the church, surveying the village green, looked fabulous. No village fete would be complete without a local dance troupe and thankfully the sun was out so the morris dancers and the modern dancers entertained villagers for most of the afternoon with some wonderful performances. I bought some locally produced apple juice and honey and wandered around in the sun with Blue Bell Hill Councillor Peter Homewood happy that the village festival season is finally here – summer has arrived!!
Posted by Tracey Crouch at 18:29 No comments:

Tonight I drove down to Folkestone to celebrate Michael Howard’s 25 years as an MP. I grew up with Michael as my MP and he should be credited for getting me actively involved in politics. I spent many happy years involved in his association and working in and on his election campaigns so I enjoyed returning to Folkestone this evening to see so many familiar faces and old friends. I think it is testament to Michael’s achievements that there were video recordings from all 5 Leaders of the Party he has served as an MP under – Mrs Thatcher, John Major, William Hague, Iain Duncan Smith and of course David Cameron, who like me has worked for Michael and knows him well. I felt privileged to be invited to his surprise party but sad that Parliament, along with the electorate of Folkestone & Hythe, is losing such a hard working MP.
Posted by Tracey Crouch at 23:03 1 comment:

Is the Lisbon Treaty dead?

After the Irish voted “no” in their referendum on the Lisbon Treaty, one would be forgiven for celebrating this evening thinking that the EU Constitution was dead. Except I just heard an interview with a French politician on the World Tonight which makes me wonder whether the Irish vote will simply be ignored and the Treaty, in some other form, will just be pushed through. UK Foreign Secretary David Miliband has already said that the Labour Government will push ahead with ratification, despite not asking the public what they think in a referendum as promised in their manifesto. The EU rules clearly state that the Treaty has to be ratified by all 27 countries, but I get this sense that after the result today the goal posts have just been moved. Put the champagne on ice…this is not over yet.
Posted by Tracey Crouch at 22:50 2 comments: 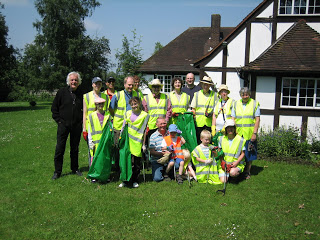 After spending the morning delivering newspapers, I joined Blue Bell Hill Councillors Allan and Peter in a community litter pick organised by the vicar of St Albans Church The Rev Phil Wootton. A number of parishioners and local residents turned up and were kitted out by Bev from Tonbridge & Malling Council in high visibility jackets and gloves, and after photos and a short prayer of thanks, off we went around the village armed with litter pickers and green bags. We were only out for an hour but still managed to fill half a dozen bags which is quite shocking. The funniest moment of the afternoon was when two bare torsoed lads in a suped up car pulled over and asked very politely (even saying please!) if they could put their beer can in the bin – the driver was at pains to point out that it wasn’t his – before speeding off into the distance giggling to themselves. I didn’t care – at least I didn’t have to go and pick it up of the path with my litter pickers, which incidentally had a crocodile painted on them!! And after an hour of hard work in the hot sun I think it is now time for a long cool drink. 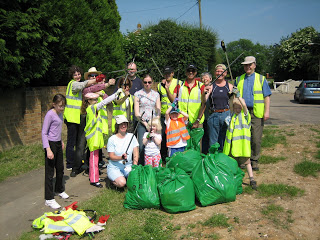 Posted by Tracey Crouch at 18:06 No comments: 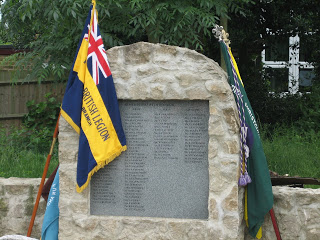 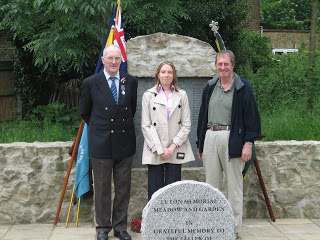 This afternoon I joined the local vicar, councillors and residents for a short service to commemorate 60 years of the Luton Memorial Meadow, which has been recently redesigned and landscaped by volunteers to honour those from Luton who lost their lives during World War II. Flag bearers from the Brownies and Scouts stood alongside the local Royal British Legion and veterans for the prayer of remembrance and a minutes silence. Once the service was finished the summer fete was opened. I was shown the book of remembrance by Don, the veteran volunteer who, alongside Bob, has worked tirelessly to ensure that the memorial meadow is free from housing development and that the meadow is maintained to honour fallen soldiers. He proudly showed me photos and letters that span over 60 years, including two from Dame Vera Lynn. I was really pleased to have been a part of today’s service. 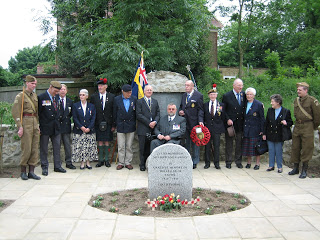 Posted by Tracey Crouch at 18:48 No comments: 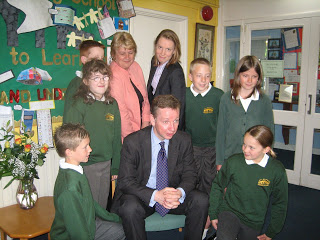 Following David Cameron’s decision to hold his Shadow Cabinet in Maidstone, I hosted my first senior politician tour of the patch today. It was a bit odd to be on the “other side” of a tour as previously I had been the one that would sign off David Davis’ visits, but today I was the one playing hostess – and I was unusually nervous when I woke up this morning. A lot of work goes into organising them and you are always at the mercy of other people so you can never be quite sure how a visit will go – but it went brilliantly.
Michael Gove, Shadow Secretary of State for Children, Schools and Families, had specifically requested to come to Chatham & Aylesford which is hugely flattering because it usually happens the other way round! So after lunch at County Hall with Cameron and his team, Michael and I headed first to Aylesford Primary School where we were met by the wonderful headmistress Mrs Evans, the family liaison officer Jane and local Councillor Dave Smith.
Mrs Evans took us on a tour of the school which is a delightful primary in the shadow of the new Sports Academy. It is sad that such a huge amount of money has been invested in the secondary school and yet the primary school has had very little extra money invested in it and although extremely neat and tidy is in desperate need of repair. So much time and energy is spent devising policy on secondary education that often the primary system is forgotten despite the fact that if you get it wrong in the early years, then the rest of the education system falters. As soon as you walk into Aylesford Primary, you know you are entering somewhere special – it was evident almost immediately, as we walked through a salsa class, that the children appeared to be thoroughly enjoying their learning. I was hugely impressed by the game of Simon Says being conducted in French by the Deputy Head – I am ashamed to say that I found it difficult to keep up with the children, who were a 100 times better than me!
After our tour of the school, I took Michael up to Buckmore Park Kart Circuit where we saw the Park’s launch of Playing for Success with local children.
Playing for Success Kent provides a wide range of activities that enable, enrich and extend young people’s experiences in Kent. It promotes informal, active and most importantly learning opportunities outside normal school hours. Playing for Success is a partnership initiative between the Department for Children, Schools and Families, Kent County Council and four clubs in Kent including Buckmore Park, Ebbsfleet United and Kent Spitfires.
Not only did we spend some time on the karts (although not driving them!) and in the class with the children, but we also heard about some of the other community projects Buckmore Park has been involved in to help local children, especially those who have been excluded from school. What this latest project helps do is highlight in a very practical way how literacy and numeracy fit into everyday life, and helps develop their skills in a way that is perhaps less daunting for them than a class room. It was hugely impressive and the children were very excited to be part of the scheme. Although the funniest part of the afternoon was when Michael started to ask questions about Britain’s Got Talent – he wanted Signature to win (as did I) although almost everyone in the class had a different favourite!!
Once we had finished at the Park I managed to get Michael back to Maidstone in time for his train back to London and finally heaved a sigh of relief – my first Shadow Cabinet visit had gone well, without a hitch and to schedule.
Posted by Tracey Crouch at 18:12 No comments: