Yesterday I heard the awful story of a young paratrooper who was so severely injured in a roadside attack in Afghanistan that he lost his legs and suffered damage to his spine, skull, pelvis, hands and ribcage. Despite the fact that he will need care for the rest of his life, he has been offered a paltry £152,000 in compensation. If these injuries had been sustained in a car accident it is likely he would have received a lot more than this. Putting this specific case aside, I believe the way our veterans are treated is poor, especially in comparison to other countries. Young men and women put their lives on the line for our country and yet when they return we let them down so badly. Soldiers are not particularly well paid so the very least they should expect from Government is a duty of care. It is hardly a surprise that army personnel and veterans feel completely disillusioned. The British Legion have launched a campaign called Broken Covenant which will focus on the need to boost medical care, strengthen the system of coroners’ inquests to ensure swift closure for bereaved families, and provide more compensation. You can show your support for the campaign HERE.
Posted by Tracey Crouch at 08:01 No comments:

I spent the day in Chatham High Street collecting signatures against Medway Magna’s proposals to build 9000 houses in the Capstone Valley. Opinion is so firmly against that we had people queuing to sign the petition and we got nearly a 1000 more signatures for our petition in less than 3 hours. I had a bricklayer sign the petition saying it may put him out of work but he “didn’t want to see the last remaining green space in Medway developed into the largest housing estate in Europe as a result of John Prescott’s plans to concrete over the South East”. Quite! The online petition is still available to sign online HERE.
Posted by Tracey Crouch at 21:39 No comments:

The closure of Maidstone A&E will ‘put lives at risk’

A study by the Medical Care Research Unit at Sheffield University has confirmed the fears of local campaigners that the closure of Maidstone A&E will put the lives of seriously ill patients at risk by making them travel further.Researchers found that the risk of death increased by 1% for every six miles travelled. Those with breathing problems were most at risk compared to those with other conditions. Their chances of dying were 13% if the distance to hospital was between six and 12 miles, and 20% if this was 12 miles or more. From Aylesford to Pembury is at least 18 miles and in traffic can easily take 40 minutes to get to by car. This research clearly undermines the Government’s claims that closures are based on clinical needs and the campaign against the closure of Maidstone A&E has always been focused around concerns about the distance to the new unit at Pembury. I hope that the Health Secretary will now consider this study in his deliberations on the future of Maidstone A&E, alongside the strength of local opposition against these proposals, and rule in favour of keeping this essential service open.
Posted by Tracey Crouch at 09:55 1 comment:

It was reported today that a group of Europe’s “wise men” has said that the European Union treaty agreed by Tony Blair in June is substantially the same as the constitution rejected two years ago. The Group, nicknamed the Amato Group because it is led by former Italian Prime Minister Giuliano Amato, has analysed the new Treaty and found that it is practically the same as the Constitution voted down in referendums held in France and Holland in 2005. The new Treaty will see the creation of a new EU foreign minister, a new full-time president of the EU council of ministers, and a big cut in national vetoes over decision-making in justice and home affairs.Open Europe, a European reform think tank, has published an excellent document comparing what UK Ministers are saying on the new Treaty and what the rest of the EU’s politicians are saying. It makes interesting reading and can be found HERE.Given what we know now why are we still being denied the opportunity to have a referendum on the new Treaty? We the British public are being conned about what is in this document. It is a constitution in all but name so I believe a referendum is required. I have signed the Telegraph’s petition for a vote on the new Treaty – you too can add your signature HERE.
Posted by Tracey Crouch at 21:16 No comments:

Am not quite Mary Poppins yet!

I joined local Conservatives today at the annual Kites Over Capstone event to collect signatures for a petition against Medway Magna’s proposals to build 9000 houses in the Capstone Valley. Unfortunately the weather was atrocious and the event was called off half way through the day. We managed to get the signatures of those braving the persistent heavy rain but it was disappointing that the weather ruined a usually excellent event. Shame – I was looking forward to making and flying my own kite!
Posted by Tracey Crouch at 20:14 No comments: 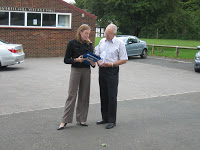 I joined Blue Bell Hill Councillor Allan Sullivan today on one of his regular walkabouts and despite it being a little chilly I thoroughly enjoyed meeting local residents and discussing a plethora of local and national issues.
The main local issues raised today were changes to the bin collection service and a contentious planning application on Common Road.
On the changes to the bin collection, from September, a public meeting is being held on Wednesday 22 August at 7.30pm in the Village Hall to explain the changes. It is important to note that whilst there will be alternate weekly collections going forward of green and black bins, food waste can be put in either bin so effectively will continue to be collected weekly.
The other issue is the contentious planning application in respect of the land east of the Common Road Water Tower. The application is for the “change of use of the land to storage and stationing of a mobile home”. Residents opposed to the application should write to the Planning Office at Tonbridge & Malling Borough Council citing Ref: 07/02245/FL.
Posted by Tracey Crouch at 20:40 No comments:

I am delighted to see that our local Labour MP has finally joined the Conservative campaign to defend against Medway Magna’s latest proposals to build over 9000 houses in Capstone Valley.
He may, however, wish to consult with his new boss Mr Brown on his delayed support since the Prime Minister outlined proposals before the summer recess to increase housebuilding by reforming the planning system to make it more difficult for local objections to succeed. Following which the communities minister, Hazel Blears, conceded that the need for new homes must take priority over environmental concerns and said she could not given “categoric assurances” about redrawing the green belt.
It is quite clear that the Labour Government is not absolutely committed to protecting the greenbelt, which is essential for guarding against urban sprawl. The Conservative Shadow communities secretary Eric Pickles in response to this threat recently said: “I fear the greenbelt now faces a sustained assault from Labour’s army of bulldozers and concrete mixers – with local communities powerless to resist Whitehall’s Soviet-style targets. We need to build more homes and regenerate rundown communities – yet greenbelt protection must remain. The greenbelt defines and protects urban communities from sprawl.”
I couldn’t agree more.
Saving Capstone Valley from becoming another housing estate should not be a party political issue so I look forward to our local MP signing our petition opposing Medway Magna’s proposals.
Posted by Tracey Crouch at 19:20 No comments:

The real definition of a “fairweather” supporter

I am supposed to be at White Hart Lane watching Tottenham v Everton but as I walked out the office the heavens opened. Not even my purple pac-a-mac, previewed rather fetchingly on this blog, would have kept me dry this evening. So Sky TV it is. More later on the Football Blog.
Posted by Tracey Crouch at 19:43 1 comment:

My apologies for the blogging silence recently but I have only just returned from a wonderfully relaxing holiday in France, where shamefully I did very little other than sample the local cheese and wine produce, lounge by the pool, and read numerous books. I love reading but unfortunately, other than for my work book club, rarely get the chance to read books. I took 7 books away with me but only read 5: Daphne Du Maurier’s Rebecca (wonderful); Francis Elliott’s biography of David Cameron (very interesting); The Number 1 Ladies Detective Agency (excellent, poetic and easy to read); Claire Tomalin’s biography of Thomas Hardy (my holiday favourite – nearly 800 pages of a brilliantly written insight into quite possibly one of the UK’s best writer of fiction and, often forgotten, poetry); and finally Alastair Campbell’s diaries (it pains me to have paid money into his pension pot but it was quite an interesting, albeit sometimes read with total scepticism, account of his time with Blair).And whilst I was away –I shall write more soon…
Posted by Tracey Crouch at 21:30 No comments: