Some thoughts on the Budget

The Times Leader’s opening paragraph sums up yesterday’s Budget statement really well. It says:“We have the measure of this Government now. In only seven weeks, George Osborne has put together an emergency Budget that has restored some clarity and sanity to Britain’s finances. This was not a Budget of unavoidable cuts and inevitable tax rises. It was much better than that, and bolder. Mr Osborne has made some fundamental choices on tax and spending that were daring, but also sensitive to many of those who will feel the pain. There was not flicker of ideological fervour for cuts of which Labour has been warning; only a sense of regret and realism, coupled with an apparent desire to tell the bad news straight, rather than hiding it in footnotes”.It is spot on.Yesterday, the Chancellor delivered a Budget statement in recognition of the mess that Labour left this country in. The state of the UK economy was a key factor in the constituency during the Election and everyone I met on the doorstep knew that whoever formed the Government would be faced with tough decisions. Labour left behind one of the largest budget deficits in Europe. Thanks to their incompetence, we are now are borrowing one pound for every four we spend. If we fail to deal with the deficit the consequences would be severe – and it is the poorest who would suffer the most. We only have to look at Greece to see what happens to countries that don’t live within their means – more businesses going bust and higher unemployment.The Liberal Democrats and Conservatives have come together to tackle the debt crisis facing our country. The Government has taken the tough decisions that the Governor of the Bank of England and the G20 called for and that Labour ducked. But let’s be clear about some of Labour’s political rhetoric around some of these key announcements. Leaked documents following the 2008 Pre-Budget Report showed that the last Labour government were going to raise VAT to 20%. Their attack on yesterday’s announcement is therefore rather hollow. However it is important to note that it will be the wealthiest fifth of families who will pay on average over £500 a year in additional VAT, while the fifth of families on the lowest incomes will pay around a third of that. VAT will still be below the average rate in Europe. Fairness underpins this Government’s budget. The Government will ensure that every part of society makes a contribution to deficit reduction while protecting the most vulnerable, including children and pensioners. The emergency budget sets out measures to refocus the tax and benefit framework. It also includes action to reward those who work hard and save responsibly. The Chancellor announced support for low and middle-income earners by increasing the personal allowance of £1,000. This will take 880,000 of the lowest income tax payers out of the tax and benefit 23 million taxpayers by up to £170 per year. In the South East over 3 million basic rate taxpayers will gain by up to £170 from this measure.He also announced a triple lock on the state pension so it rises annually by the higher of earnings, prices or 2.5% from April 2011 – this will benefit 11 million pensioners, 1.6 million of which live in the South East.Much criticism has also been levied at the announcement on benefits reform. Many people I met were appalled at the abuse of the benefits system and argued for reform. Much of what was announced yesterday will focus the benefits system to help those who need it most. I will however pledge here and now that I will call for an assurance that the medical assessment will consider those who suffer a mental illness, which is often a hidden disability and requires support.There were of course many more announcements in the Budget yesterday all of which can be found on the Treasury website. But in summary the emergency budget sets out clearly how we will pay for the bills of the past and it also starts planning for the future. It shows how the Government will carry out Britain’s unavoidable deficit reduction plan in a way that strengthens and unites the country. It will along with everyone else in the UK affect constituents of Chatham & Aylesford but it will also help put this country back on track for economic recovery. The short term pain will provide for long term gain.
Posted by Tracey Crouch at 22:07 No comments: 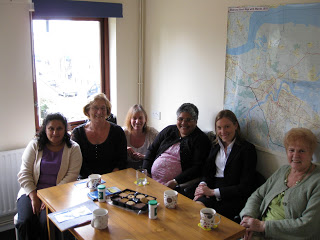 Encouraged by a recent meeting with ITV’s This Morning celebrity GP, Dr Chris Steele, I visited the Medway Carers Centre yesterday in support of Carers Week (14-20 June) to celebrate the contribution made by people across Medway who provide unpaid care for someone who is ill, frail or disabled.
There are a shocking 21,000 carers across Medway, many of whom are children, who sacrifice much of their own lives to look after others and are unable to do the little things that most of us take for granted. A trip to the cinema or even a full night’s sleep are luxuries for thousands of people across Chatham & Aylesford and we more often than not forget this.
Visiting the centre yesterday was an important initiation for me on this issue and I felt very humble afterwards. I popped into a caring with confidence class that the Centre runs and instead of just saying hi briefly, we ended up having an impromptu Q&A session. This was followed by a more formal meeting with carers and volunteers at the Centre. Both parts of the visit raised some very good points about policy changes or improvements and I look forward to taking them up with the relevant ministers. 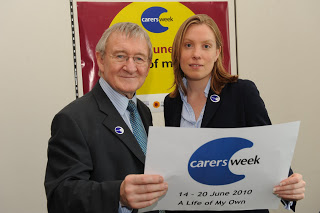 Posted by Tracey Crouch at 08:01 No comments:

In response to an oral question during Work & Pensions Questions yesterday, the disabilities minister Maria Miller paid tribute to the work of Royal British Legion Industries in helping disabled people find work. She said it was “vital” to have organisations like the RBLI “on-the-ground” supporting disabled people and that they would play a role in the Work Programme being prepared by the Employment Minister.Having been around RBLI and seen first hand the excellent work they do, I was keen to support them in the Commons. The full exchange can be found HERE.
Posted by Tracey Crouch at 13:40 No comments:

I made my Maiden Speech today in the debate on poverty. The first speech you make in the Commons is different to any other in that precedent determines you talk about your constituency, you pay tribute to your predecessor, and reading your speech is forgiven (from now on it is not!). However I wanted to talk about the issue of poverty as well as it is an important element of the challenges we face locally and nationally. The full text of my speech can be found HERE.
Posted by Tracey Crouch at 22:20 2 comments:

It has been a while since I last blogged but the whirlwind introduction to Parliament has continued. I still don’t have an office in the Palace of Westminster but these things take time to work out, and I am beginning to enjoy working with colleagues in our “common room” of hot desks; we are sharing our experiences of working out how to do certain things such as tabling questions or dealing with specific areas of casework. I spent some time in the Chamber last week just to watch, listen and learn and I also signed my first Early Day Motion which supports Carers’ Week – a group of people who are the epitome of unsung heroes and who I have come to really admire over the past four years. The postbag continues to grow day by day, most of which comes from external organisations who are blanket communicating with MPs regardless of their constituency or political interests, but is on the whole largely under control.
On Friday I was pleased to be back in the constituency and the day started early on with a meeting in West Malling with our local PC and PCSOs. It was a great opportunity to share our concerns and talk about ways of working together to protect and improve our local community and I look forward to doing the same in a couple of weeks time at the Medway end of the constituency. After a private lunch, I went to County Hall to meet with the Ditton Youth project to support their submission for funds from KCC to help with the renovation of the cedar rooms for a new youth club. Having met the youngsters a couple of weeks ago, it was good to see them still full of energy and enthusiasm.
Saturday was a quieter day. I spent most of the day doing paperwork before heading over to the Love Music, Hate Racism festival in Medway. I wanted to support the event after witnessing a small increase in the BNP vote at the General Election and it was great to hear from the Hope Not Hate group who so successfully helped fight off the BNP in Barking. As I departed the festival was gearing up for 3 days of live music, all in a good cause.
Friends and loved ones kept me away from my laptop on Sunday which enabled me to rest, relax and catch my breath a bit. One of the things I have noticed in the first couple of weeks in Parliament is that I haven’t really had time to read a newspaper so it was nice to sit down and catch up with news and comment – that time passed quickly and it was soon time to get back to the emails.
Today the House wasn’t sitting so I had a bonus day in the constituency. I took the opportunity to look at a potential office, do a home visit, meet with local councillors, lunch with the Chief Executive and Operations Director of MHS, go through the post with my researcher and finally attend the launch of an art exhibition in the Brook Theatre by youngsters in care alongside the Mayor and local artist Billy Childish. Tomorrow, it is back to the House of Commons for the first Prime Minister Question Time since the General Election…so no end to the whirlwind just yet! 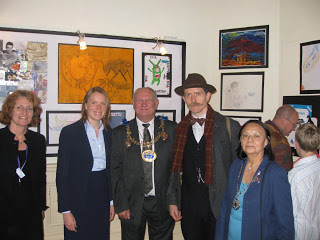 Posted by Tracey Crouch at 21:48 No comments: